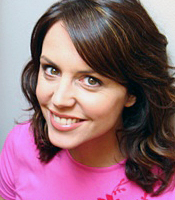 Beverley Turner loves words. She has a First Class English Literature / Language Degree and after working as a columnist for The Independent, is now a feature writer for The Daily Telegraph.

Away from TV and radio, she works as a copy-writer, providing snappy, tailored content for corporate websites. Her first book, the critically acclaimed 'The Pits:the real world of F1', arose out of the three bizarre years she spent as a pit-side reporter for ITV1. By the end of 2009 she had completed her first novel and co-written a stage-play.

Beverley's fascination with the human mind and relationships, inspired her to take up a two-year Psychotherapy / Hypnotherapy diploma from which she graduated in 2010. She's a devoted foodie and hosted the perennially popular Taste for Sky One & Sky Three.

Over the last ten years Beverley Turner has presented a broad range of both live and recorded shows for BBC2, ITV and SKY1. She spent two years as Eammon Holmes' sidekick at BBC Radio Five Live. She is a former model and competitive swimmer and is married to Olympian James Cracknell.

Beverley Turner's ceremony hosting credits include The FHM Menswear and Maxim Grooming Awards as well as The Formula One Grand Prix Awards at the NEC Birmingham in front of 7,000 people. For the last five years she has hosted The Aim Awards (financial markets), proving that she can control even the rowdiest City crowd!

Her sense of fun ensures she is always a popular host, but she judges the tone of an occasion perfectly and brings her skill as a writer to all scripts. On occasion she works alongside husband James Cracknell, completing a dynamic and different awards presentation team.

Clients often ask about purchasing books for giveaways and delegate packs. Below you’ll find a selection of products by Beverley Turner. Click the images to view on Amazon's website. For bulk orders, please speak with your Booking Agent.

How to book Beverley Turner for your event