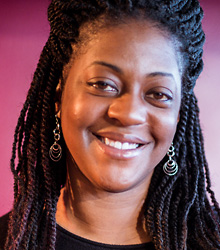 Ava Vidal had a rather unique upbringing. She grew up in Syria, attended public school, became a mother at 18, studied law and spent five years as a prison officer at London's Pentonville prison.

A chance viewing of a Chris Rock routine inspired her to pursue comedy. In the very first year of her career, Ava turned heads as the BBC New Comedy Awards' only female finalist. She quickly became a fixture of the stand-up comedy circuit performing in the UK, USA, Canada and Australia.

Ava has appeared on Mock the Week, Michael McIntyre's Comedy Roadshow, Comedy Central's The World Stands Up, Edinburgh and Beyond and C4 reality show Kings of Comedy. She was the subject of the documentary From the Top, detailing her background and development as a comedian.

She is a patron of Show Racism the Red Card and The Stop and Search Legal Project. As well as the many comedy shows, she has appeared regularly as a commentator on programmes such as Newsnight, This Week, Channel 4 News, The Wright Stuff, Daybreak, ITN News and BBC World Have Your Say. She has written for The Guardian, Independent, Huffington Post and New Statesman amongst others.

Ava juggles motherhood with a hectic schedule of comedy bookings, TV appearances (both as a comic and commentator), writing and journalism.

Ava is able to speak about diversity, equality, race relations and feminism. She has spoken at Oxford and Cambridge Student Unions, Lancaster University, London School of Economics (LSE) and many schools.

She has also spoken in the City at prestigious firms such as Simmons and Simmons, Rothschild, and Herbert Smith Freehills amongst others.

Ava was brilliant as part of the panel. The initial feedback we got from the attendees was all really positive.

How to book Ava Vidal for your event