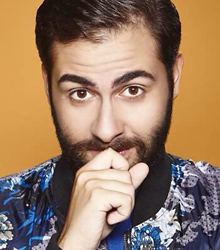 Andrea Faustini left the judges open mouthed when he belted out Jackson 5's Who's Loving You in his room audition, and since then the X Factor finalist has gone from strength to strength.

Andrea was part of the 114 other acts who successfully got through the Arena Auditions in London on The X Factor 2014. Together with other male contestants up to the ages of 25, he was later placed into the "Boys" group, mentored by judge Mel B.

Andrea Faustini got through the six-seat challenge during Bootcamp, replacing Hayden Leeman. Faustini's performance of Whitney Houston's I Didn't Know My Own Strength during Bootcamp moved judges Mel B and Cheryl to tears, as well as earning him a standing ovation from Simon Cowell and Louis Walsh.

Since the end of the show, Andrea has released his first single, Give a Little Love, a self written, gospel infused track which shows off Andrea's positive energy.

Andrea Faustini released his first album, Kelly, in 2015 and looks set to continue his climb to the big time.

How to book Andrea Faustini for your event