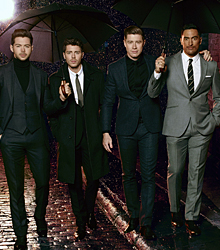 Jack Pack is a uniquely contemporary swing pop group made up of four distinct vocalists: Andrew Bourn, Alfie Palmer, Martin McCafferty and Sean Ryder Wolf, who channel an elegance reminiscent of the last days of true Hollywood glamour with a quintessentially British twist.

Imagine taking the style of the Rat Pack, the grace of Sinatra and the panache of Michael Bublé and combining it with the raw chemistry and cheeky chappy swagger, these four handsome lads will soon get the party started in any setting.

They transport us back to a timeless era and add a contemporary feel to Swing classics such as My Way, That's Life and Feeling Good, by delivering sensational lead vocals and beautiful tight harmonies. Their performance is powerful, slick and you can't keep your eyes off them. They preserve, do justice and add value to that wonderful genre as they effortlessly work their way through their set. The songs are sung as they were written to be sung as the boys draw the audience in with their delivery, flair and star quality.

Signed to Simon Cowell's label Syco, Jack Pack is highly rated and widely tipped for a huge career, and are a serious addition to any event. Not only will they give you a musical performance to remember, they will combine it with chat, audience interaction and professionalism. Also there is the small point that they are totally gorgeous, which the ladies won't be upset about!

If it's a show you are after, then these guys will certainly give you one!

Jack Pack can perform live with backing tracks or for a longer set with their band. A standard performance is usually 30-40 minutes duration. Their sets includes:

From their album repertoire:
Light My Fire, Forever, I Put a Spell on You, Stay With Me Baby, Story of My Life, Mack the Knife, Stay for a Minute, Lazy River, Say That You Love Me and My Way.

They also perform:
That’s Life, Feeling Good, New York, New York, Can’t Take My Eyes Off You, Fly Me To The Moon, Save The Last Dance, Sway, The Way You Look Tonight, Ain’t That a Kick in The Head and Leroy Brown.

They can also add the following festive songs:
The Christmas Song, Have Yourself a Merry Little Christmas, Santa Clause is Coming to Town and White Christmas.

Recent engagements have taken Jack Pack across Europe and to Asia. They have performed for M&S, Nationwide, Land Rover, Royal Mail, British Airways and even got HRH Prince Charles on the dance floor at his Christmas Party at Clarence House.

Public performances have included headlining the Hippodrome Casino in London, performing at Rochester Castle and at the Christmas Lights switch on at Regents Street and also in Perth.

Jack Pack were absolutely brilliant! Not only in their performance but also before and after.

How to book Jack Pack for your event