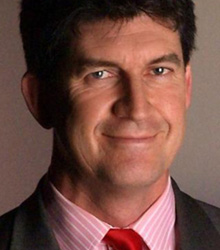 Alex Thomson is a familiar face as a regular main presenter of Channel 4 News. When not in the studio he's a roving correspondent for the programme, having covered 14 wars- the most recent in Iraq.

Since joining Channel 4 News in 1988, he's won a series of major national and international awards for both war reporting and investigative journalism.

Alex Thomson also compered and presented The British Design Brands Awards at London's Dorchester Hotel. He also is a regular panellist and speaker on media issues at schools and colleges around Britain.

Alex is also a guest presenter of 'The Correspondents' for CNN International and is the author of two books, Smokescreen - The Media, The Censors, The Gulf War and Ram Ram India - A bicycle journey across the subcontinent.

Clients often ask about purchasing books for giveaways and delegate packs. Below you’ll find a selection of products by Alex Thomson. Click the images to view on Amazon's website. For bulk orders, please speak with your Booking Agent.

How to book Alex Thomson for your event