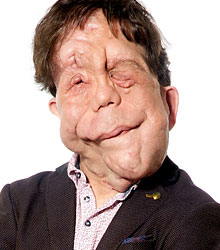 Adam Pearson is an award-winning disability rights campaigner, actor, presenter and keynote speaker. He was nominated as UK Documentary Presenter of the Year at the 2016 Grierson Awards.

After Adam hit his head at the age of five, the resultant bump persisted instead of healing. He was diagnosed with neurofibromatosis type I, which causes non-cancerous tumours to grow on nerve tissue. Adam has an identical twin brother, Neil. Both of them have the condition, which manifests very differently between them.

Adam has presented Eugenics: Science’s Greatest Scandal (BBC Four), as well as the critically acclaimed documentaries Horizon: My Amazing Twin (BBC Two), Adam Pearson: Freak Show (BBC Three) and The Ugly Face Of Disability Hate Crime (BBC Three), as well as being a reporter on Tricks Of The Restaurant Trade (Channel 4) and The One Show (BBC One).

Adam worked as a researcher for the BBC and Channel 4 before becoming a strand presenter on the first series of Beauty & The Beast: The Ugly Face Of Prejudice (Channel 4). He was also one of the team who developed the series and he consulted on the Dutch version. Adam has also worked on The Undateables (Channel 4) as a casting researcher.

Adam appeared in the BAFTA-nominated film, Under The Skin, directed by Jonathan Glazer and starring Scarlett Johansson. He also played himself in the independent feature, DRIB, which premiered at SXSW in 2017.

Adam stars in Chained For Life which has been released theatrically in the UK and and US as well as being shown at film festivals around the world. Of his performance, The New York Times described him as “an actor of great charm.”

Adam Pearson is an ambassador for The Prince’s Trust, Changing Faces and Us In A Bus. He also won a RADAR Award and a Diana Award for his campaigning work. He was named in The Shaw Trust Power 100 List of 2020 – a list of the UK’s most influential disabled people.

Adam Pearson delivers keynote speeches focussed on disability inclusion and accessibility based on his lived experience.

He has spoken at many corporate events for companies and organisations such as the World Health Innovation Summit, Public Service & Criminology Conference and British Association for Counselling & Psychotherapy. He has also given a TEDx talk.

Adam is a very likeable and funny man who engaged well with the audience and was not afraid to express his opinions. The evening was extremely interesting with good input and questions from the audience which he dealt with in a caring and witty manner. Adam helped us to reach out to our community in challenging their opinions of disability ... We would be delighted to work with Adam again in the future as we continue our work to raise awareness of disability.

How to book Adam Pearson for your event