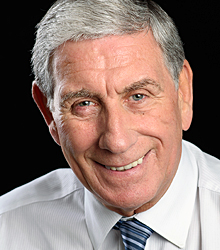 Trevor Marriott joined the Bedfordshire Police in 1970 and was soon promoted to the Criminal Investigation Department (CID), where he was involved in the investigation of numerous murders.

For many years Trevor had been fascinated with the mystery of Jack The Ripper and The Whitechapel murders, so much so that he knew one day he would have to satisfy that curiosity. In later years, and with more free time on his hands, he decided to reinvestigate these unsolved murders. Trevor felt that all the experience, knowledge and insight into the criminal mind he had gained by interviewing and talking to murderers, rapists and robbers over the years would be invaluable in an attempt to view the murders through the eyes of the killer and also for him to be able to use his own individual investigative techniques in the process.

Trevor Marriott carefully studied all aspects of the murders themselves, and all the evidence relating to the prime suspects, which has emerged over more than a century, with a view to either proving or disproving some of the accepted theories surrounding the murders. In doing so he hoped he might find something new that would unlock the mystery of Jack the Ripper's identity.

What Trevor Marriott discovered during the investigation was startling. He was able to now cast a major doubt as to the actual number of victims killed by Jack The Ripper and some of the accepted theories surrounding the mystery.

Through his investigation Trevor was able to pursue a new line of enquiry which had never been undertaken before, this led him to a new suspect and new evidence to show that Jack The Ripper murdered other women in similar fashion in The USA and Germany, thus making him the worlds first transcontinental serial killer. His investigation finally led him to unlock the mystery of Jack The Ripper and enabled him to identify and name the killer and to show what fate befell him.

Trevor Marriott is in continuous demand throughout the UK and around the world as a guest speaker and lecturer, giving audio-visual presentations not only on the topic of Jack the Ripper, but other equally interesting crime-related topics such as “Serial Killers”, “Modern Day Forensics” Crime Prevention”, along with talks relating to myths and mysteries from around the world that have fascinated and captivated the imagination of the public at large for many years.

Jack The Ripper - The REAL Truth
In this presentation, Trevor Marriott reveals the results of his lengthy cold case 21st century reinvestigation into this murder mystery, which has fascinated people worldwide for over 129 years. The results of which now dispel and shatter the myth that surrounded Jack the Ripper and The Whitechapel Murders.

In addition to his Jack The Ripper and forensic crime presentations, Trevor is also able to offer a murder mystery quiz, formulated around television police and crime series over the past 30+ years. This makes an ideal attraction for a fun night on its own, or can be linked to the main presentation to form a complete evening of entertainment.

Clients often ask about purchasing books for giveaways and delegate packs. Below you’ll find a selection of products by Trevor Marriott. Click the images to view on Amazon's website. For bulk orders, please speak with your Booking Agent.

How to book Trevor Marriott for your event