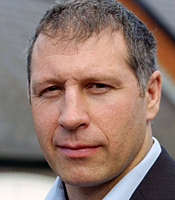 Mark Williams-Thomas is a former police detective who has far-reaching experience of working at the centre of high profile investigations, specialising in major crime and child protection. In October 2012, Mark led an investigation and presented an ITV programme “Exposure: The Other Side of Jimmy Saville”which outed the celebrity entertainer as a prolific and predatory paedophile.

Mark has a high profile in the media and is a regular face on television as a presenter for ITV's flag ship current affairs programme, 'Tonight', in addition to being a reporter for the BBC One Show and BBC Newsnight.

Recent programmes include BBC One Show 'Facebook' and on ITV Tonight – 'Online Bullies' and the series, 'To Catch a Paedophile' which involved Mark spending 18 months with unique access following the Metropolitan Police Child Abuse Command Unit. This programme tackled the growing problem of Online Peadophiles and was nominated from over 900 entries from 35 countries for the BANFF World Television Awards.

In the media Mark Williams-Thomas has covered, and been an advisor in, nearly all the high-profile crime cases over the last 3 years. These have included the death of Baby P and the Plymouth Nursery Paedophile Investigation, the murder of Joanna Yeates, The Crossbow Killer Stephen Griffiths, the Ipswich serial killer Steve Wright and the Cumbria spree killer Derek Bird. As well as the disappearance's of Madeleine McCann, Shannon Matthews and Jaycee Dugard (US).

Mark Williams-Thomas is also the police advisor on many of the crime dramas on television such as the most recent BBC1 Silence and ITV Identity as well as the ongoing programmes, Waking the Dead, Wire in the Blood and The Inspector Lynley Mysteries.

In 2005, he set up an independent Child Protection & Risk Management Consultancy which works very closely with local authorities, sports governing bodies and commercial organisations, providing specialist advice and support. WT Associates was appointed Child Protection Consultants for Team GB at the Olympic Games in Beijing and has also completed a significant review of past cases for the Church of England.

Mark Williams-Thomas has presented and chaired at various international conferences - on aspects of crimes against children and the media.

Most recent conferences he has presented on the following subjects:
* Pro-active policing of online offenders
* Female child sex offenders
* How to use Social Networking sites safely
* Cyber bullying
* Media portrayal of crimes against children in the media
* Crime Dramas- how to be a police adviser

How to book Mark Williams-Thomas for your event