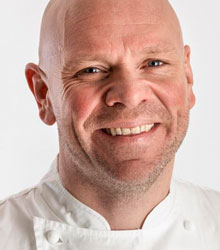 Tom Kerridge is the incredibly popular and loveable chef patron of the extraordinary two Michelin-starred The Hand & Flowers pub in Marlow, Buckinghamshire.

Since opening in 2005, Tom Kerridge’s career path has progressed and grown with the support of his wife Beth and many members of key staff, allowing the business to grow and diversify.

In 2011, The Hand & Flowers was the first pub to receive two stars in the Michelin Guide, an accolade that they still hold today and that as a team, they are all very proud of. It was quite a moment for Tom and Michelin when the second star was awarded. The world’s culinary press descended on Marlow following the announcement and discovered a special venue, team and chef there.

Near to the pub they also have The Shed, a private dining room by The Hand & Flowers team seating only 9 people. Continued staff development led to the growth of the business, opening The Coach in 2014 that within its first year of trading received three AA Rosettes and voted third best pub in Britain by the Top 50 Gastropub Awards. In 2017 The Coach was also awarded a Michelin star.

Tom was also awarded the coveted ‘Chef Award’ at the 2017 Cateys. In October 2017, Tom opened The Butcher’s Tap in Marlow which is a fully operational butchers and pub under one roof. Then, in September 2018, Tom opened his first restaurant in the capital at Corinthia London, Kerridge’s Bar & Grill and then went on to open his Manchester restaurant The Bull and Bear in 2019 at the new Stock Exchange Hotel.

Tom Kerridge is a great character with amazing presence, obvious warmth and an infectious laugh, so it wasn’t a surprise when he landed his first TV show. The popular BBC2 series Proper Pub Food became an overnight success with Tom’s fan base growing weekly as the six-part series was broadcast.

Since then, Tom has appeared on and presented numerous series; his latest BBC 2 series ‘Saving Britain’s Pubs’ saw Tom set out on a mission to revive struggling pubs, investigating industry challenges along with the immensely negative impact of Covid-19.

Tom is also a successful author having published several highly acclaimed cookbooks, many of which have tied-in TV programmes. Tom's long-awaited The Hand & Flowers Cookbook was published by Bloomsbury Absolute in November 2020. Celebrating 15 years of Tom’s two Michelin starred pub The Hand & Flowers and is full of the very best dishes to have appeared on the menu, including his Great British Menu winning dishes!

In 2017, Tom Kerridge launched Pub in the Park Festival in Marlow, a music and food festival celebrating local quality pub food. In 2019 the festival rolled out to eight locations all over the country.

Tom has also created a range of cookware, homeware and a range of sauces including a black garlic ketchup. The kitchenware range which includes knives, enamelware and pans are all chef quality, beautiful products that have been designed by Tom in collaboration with British manufacturers using British materials.

Most recently Tom has taken his passion for fantastic food to new heights as he partnered with British Airways to design a delicious new range of food to be enjoyed on board. This range includes signature sandwiches and a pie which have been created using Tom’s seasonal approach to cooking and his use of great British ingredients.

Tom Kerridge donates a lot of his time to many charitable causes, including his personal project ‘Meals for Marlow’ where he and his team delivered meals to the NHS and vulnerable individuals during the 2020 pandemic. The team prepared over 80,000 meals.

Most recently, he joined forces with footballer Marcus Rashford on his campaign to stop child poverty and to encourage a sustainable long-term system for free school meals for the most disadvantaged.

Clients often ask about purchasing books for giveaways and delegate packs. Below you’ll find a selection of products by Tom Kerridge. Click the images to view on Amazon's website. For bulk orders, please speak with your Booking Agent.

How to book Tom Kerridge for your event