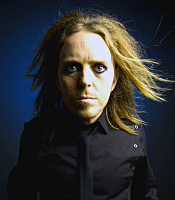 Originally from Perth, Tim Minchin completed a Bachelor of Arts in English and Theatre at the University of Western Australia in 1995, then an Advanced Diploma in Contemporary Music at the Conservatorium of WA - part of the WA Academy of Performing Arts - in 1998.

In 2002, he moved to Melbourne, where he began to develop the solo comedy shows which have gained him public and critical acclaim in the last three years. He developed his unique style during an 18-month period when he played regularly in the famous 40-seat cabaret room of The Butterfly Club in South Melbourne, before producing his break out show, Dark Side, at the Melbourne International Comedy Festival in 2005. This show won the inaugural Festival Directors' Award and was picked up by legendary Edinburgh producer, Karen Koren, matriarch of the Gilded Balloon.

At the Edinburgh Fringe, Tim Minchin became one of the most successful ever debut acts, selling out the 300-seat Debating Hall and winning the Perrier Award for Best Newcomer. He subsequently went on to perform Dark Side at the Soho Theare and the Lyric Theatre in London's West End, and also appeared on a bill with Mariah Carey and Westlife at the Royal Albert Hall, London.

He appeared at the Montreal Just For Laughs Festival in 2006 and the HBO US Comedy Arts Festival in Aspen, Colorado in January 2007, where he won the award for Best Alternative Comedian. In November that year, he performed at the HBO Comedy Festival in Las Vegas and sold out short seasons at Ars Nova in New York and the ACME Comedy Theatre in LA.

In Australia, Tim Minchin has performed sell-out shows at the Sydney Opera House, the Brisbane Powerhouse and His Majesty's Theatre in Perth, and has performed at the Adelaide Fringe, the Adelaide Cabaret Festival, the Melbourne International Comedy Festival and the Big Laugh Festival in Sydney.

Tim Minchin has become a favourite at various UK festivals including: Latitude in 2008 and The Big Chill and Reading and Leeds Weekends in 2009.

Tim's show Ready For This? has toured the UK and Australia and New Zealand to sell-out audiences for the past two years.

Tim Minchin wrote the music and lyrics for the award-winning musical Matilda for the Royal Shakespeare Company: an adaptation of the Roald Dahl children's story about a very bright and rebellious little girl, with special powers.

When not on tour, Tim lives in London with his wife and two children.

Clients often ask about purchasing books for giveaways and delegate packs. Below you’ll find a selection of products by Tim Minchin. Click the images to view on Amazon's website. For bulk orders, please speak with your Booking Agent.

How to book Tim Minchin for your event