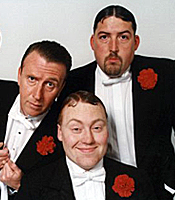 Book The Casablanca Steps
add to shortlist
About

One of the most experienced and established1920s&30smusical acts in the UK, The Casablanca Steps are four individually talented musicians and entertainers, totally unequalled in their field, Wooten Basset, Clarke Deville, Baron Von Schneider and Pico Boon.Their unique sound and authentic three-part vocalharmonies, combinedwith a quintessentially English visual element of serious “tongue-in-cheek”humour, recreate the authentic musical ambience of the1920s&30s, when “The Charleston” was all the rage, and the “swells” were “Putting on the Ritz”.

When the occasion demands nothing but excellence, turn to the best musical comedy foursome in the world, guaranteed to be the entertainment highlight of any occasion. Not only have they performed internationally on some of the world's finest cruise ships,at the most luxurious hotels and at such diverse locations as New York, Taiwan, Dubai and Paris, they have also appeared on over 40 TV shows worldwide, including Ireland'sfamous “Late Late Show”!Many celebrities and members of the Royal family have also been known to enjoy the odd evening's entertainment with The Casablanca Steps – in particular Prince Philip, during their show for him at St. James's Palace.

Their 2013 performances at Henley Festival with The Beach Boys, JamieCullum, Madness andPalomaFaith were just another thrilling chapter in the career of the masters ofmonocolism. The pure talent and unique quintessential English style of The Casablanca Steps, together with authentic 3 part vocal harmonies and hilarious visual humour, are the ingredients that make them a phenomenal success wherever they perform.

By creating an amazing atmosphere combined with a shameless display of effortless team talent, these four individuals use their skills in a way that their audience will reflect warmly upon for years and years after the event!

A breathtaking mixture of music, song, comedy and laughter from the best Corporate Cabaret Quartet in the business. For an evening of sheer indulgence calculated to appeal to the most discerning of international audiences, The Casablanca Steps are unrivalled.

And introducing, The Flapper Girls...
At one recently splendid event, Wooten, Clarke, Baron and Pico happened upon some rather naughty, flirtatious flapper girls, who showed great interest in ‘doing something' with The Casablanca Steps.Now this was not an offer to be taken light-heartedly. So, being the most respectful, clean living and charming gentlemen that they are, proud of their resolute resistance to the allure of devilish temptresses, they unanimously decided – after seconds of deliberating - that they could not possibly deprive their adoring public of such a display of sizzling energy and irresistible beauty.

Therefore, The Casablanca Steps are proud to announce that these young ladies can now be hired as an extra special addition to their show. They can be hired as two flappers (exquisitely entertaining) or as many as 6 flappers (not for the faint hearted).

A brilliant blend of song and laughter, The Casablanca Steps cabaret show can be tailored to suit your every requirement. With the ability to break down the ARTS barriers with their riotous performance, combined with compelling music, this exceptional quartet always leaves their audiences begging for more. Usual performances are either 2 x 45 minute sets or 3 x 30 minutes. However, bespoke performances can be created upon request.

Technically, they require a performance area approximately 12ft by 10ft, preferably with a 2ft raised platform / stage, although this is not essential. One 13 amp plug socket is required and access to the venue at least 90 minutes before the guests arrive.

If the performing area is out of doors, some contingency plan should be made for bad weather. The show will feature some pyrotechnics, which can be omitted on request. For venues with over 300 guests a PA / sound system will need to be supplied by the client together with appropriate technical support. A suitable, lockable dressing room and a small storage area for stage equipment are also required.

Their stylish 'take' on a particular era of music wins all age groups. I could watch them again and again.

Absolutely brilliant. Very professional - they went down a storm. Would not hesitate to book them again for any future suitable meeting.

Many thanks for providing excellent entertainment once again at the show this year. Your performances always liven up the show and lift the atmosphere.

The Casablanca Steps were fantastic and such a hit with our guests. The cabaret was a scream.

How to book The Casablanca Steps for your event

Tags for The Casablanca Steps

A unique blend of stand up comedy and physical theatre

A unique blend of stand up comedy and physical theatre