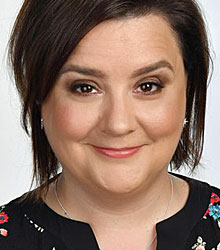 Feisty Glaswegian Susan Calman gave up a lucrative career in corporate law to become a comedian. She studied law at Glasgow University, winning a Judge Brennan scholarship and a three-month stint in North Carolina working with criminals on death row.

Susan gradually became dissatisfied with working as a specialist in freedom of information and data protection and developed her stand-up comedy during evenings, eventually giving up her job with Dundas & Wilson to develop a full-time career in comedy.

Thankfully, appearances on highbrow radio programmes like QI, The News Quiz, Have I Got News For You, The Unbelievable Truth and The Now Show have shown that 7 years at University were not entirely wasted.

Also seen on Jason Manford's Comedy Rocks (ITV1), Susan has appeared in Rab C Nesbitt (BBC2), How Not To Live Your Life (BBC 3) and Taggart (STV) when she was 17.

A Scottish BAFTA winner for Channel 4 Comedy Lab Blowout, Susan Calman has also twice been nominated for Chortle Awards. Firstly for sketch group Ugly Kid and then for Best MC. She didn't win either, but is totally fine about it, because it's the taking part that counts.

Susan reached the semi-finals of the BBC New Comedy Awards in 2005 and was a finalist in the Funny Women competition in 2006 and in 2009 she was awarded the Best New Scottish Comedian at the Real Radio Variety Awards.

Her father is Sir Kenneth Calman, chancellor of Glasgow University and former chief medical officer for England and Scotland.

Resident MC at Scotland's famous Stand Comedy Clubs, Susan Calman is also the host of ‘Funny Friends' (BBC Radio Scotland) in which she interviews notable comedians on their lives and careers. She is also often heard sitting in for Fred MacAulay on his BBC Radio Scotland breakfast show.

Susan Calman fizzed manic energy, alternating between confessional tales and playing with facts she teased out of the audience…a perfect start to a fun-filled evening.

Feisty Scot Susan Calman is one of the best female comics to ever come out of the land of bagpipes and haggis. She'll make you chuckle your pants off!

Clients often ask about purchasing books for giveaways and delegate packs. Below you’ll find a selection of products by Susan Calman. Click the images to view on Amazon's website. For bulk orders, please speak with your Booking Agent.

How to book Susan Calman for your event