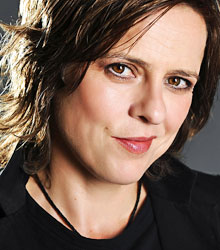 Rhona Cameron was born and raised in Scotland and after heading for London in her twenties, quickly made an impact on the comedy scene. A series of open spots led to her winning Channel 4's So You Think You're Funny Award in 1992 and since 1993, she has had sell-out shows at the Edinburgh Fringe Festival.

After her 1996 Edinburgh show, Rhona played to further sell-out audiences for three weeks in an off-West End theatre to great critical acclaim. This was followed by her hugely popular first solo tour of the UK; she has also made successful tours of Australia and New Zealand.

Rhona Cameron has made numerous appearances on leading television comedy programmes, including Have I Got News For You, The Stand Up Show, Never Mind The Buzzcocks and Saturday Live. She co-hosted four series of BBC2's pioneering Gaytime TV and also presented Top Of The Pops. Other recent appearances include Jonathon Ross and So Graham Norton.

In March 2002, following her spell as resident panellist on BBC 1's Jo Brand's Hot Potatoes, she joined the West End cast of The Vagina Monologues at the New Ambassadors Theatre. August found Rhona heading off to the Australian jungle for the massive ITV hit, I'm A Celebrity-Get Me Out Of Here. Her much-repeated 'Sometimes we're all like that' speech is now part of television folklore.

After her appearance on The Frank Skinner Show, Rhona Cameron joined the national tour of The Rocky Horror Show for a limited season before hosting Russian Roulette, a celebrity special for Granada. A major ratings-winner, three more Russian Roulette specials followed in 2003. Rhona also hosted The Luvvies, a spoof awards show for LWT and Rhona's Rudest Videos for Granada.

A busy autumn schedule found Rhona Cameron on tour with her new show, alongside which her first book '1979: a Big Year in a Small Town' - was published. 2004 kicked off with the return of The Luvvies for LWT and Rhona was also heard narrating the documentary Beautiful Boys YTV.

How to book Rhona Cameron for your event