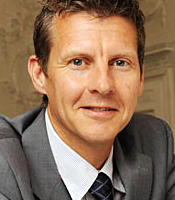 Steve Cram is one of the world's most successful middle distance athletes of all time and since retiring he has become one of the BBC's most respected Presenters.

Since retiring from competitive athletics Steve has become a very successful television commentator, first with Eurosport, and then with Channel 4 before joining the BBC as the Chief Athletics Commentator.

Steve has co-presented the 2000 Sydney Olympics, the 2002 Winter Olympics in Salt Lake City and in Athens in 2004 where his commentary of Kelly Holmes' victories will always be well remembered.

Following an incredible season in 1983 Steve was voted BBC Sports Personality of the Year, and in 1986 he was awarded an MBE.

How to book Steve Cram for your event