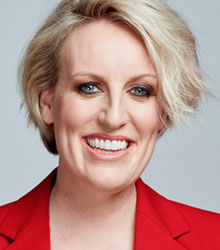 Award winning broadcaster, Steph McGovern has been working in financial journalism for over 15 years and was part of the BBC Breakfast family for five of those.

Steph travelled all over the UK to cover economic and business news for the BBC and since joining Breakfast has broadcast live from over 500 businesses.

Now with Channel 4, whether she’s talking to workers in factories or interviewing FTSE 100 chief executives in the studio, Steph makes it her mission to find out what’s going on in the real economy.

Since 2017, Steph has also co-presented BBC1’s ‘Watchdog’, and on top of her BBC Breakfast duties, and also presented her own prime time BBC1 programme called ‘Shop Well For Less’ and a children’s TV show 'Pocket Money Pitch' for CBBC.

For over ten years she has reported on business and finance from around the world, from international finance summits to small business success stories.

Originally from Middlesbrough, Steph's first taste of BBC life came aged 19, when she made a guest appearance on a programme about women in science. Steph had just won the title of Young Engineer for Britain, after saving Black & Decker money on a design she created for their Leaf Hog product.

This led to work experience on Tomorrow's World (whilst still studying at university) and, after graduating, she became the main producer for daily financial news on the Today programme on Radio 4, securing interviews with top business leaders and running a number of foreign projects, including a stint in Chicago covering the trial of Conrad Black and a series from Brazil investigating the biofuels industry.

Two years later, within weeks of becoming the producer for the then economics editor, Evan Davis, the financial world was in meltdown. Steph has covered its developments ever since. For three years, Steph was the lead producer of business news on the BBC's main news bulletins working with the then business editor, Robert Peston, at the forefront of the award-winning coverage of the credit crunch and banking crisis.

Never shy of putting in the hours, Steph soon began broadcasting herself, building up her own on-air profile, which included working as a business presenter on the Chris Evans show on Radio 2 and on BBC 5 Live’s On The Money and hosting her own feature - Steph's Sunday Shift - where she spent time in over 50 different workplaces across the UK, including a gas rig in the Irish Sea, an air traffic control centre and a nuclear power station. She also presented business news on Chris Evans's Radio 2 show.
As well as her media work, Steph McGovern is involved in community and education projects. She is also a former champion Irish dancer. She still attends competitions, and coaches, and was briefly a YouTube sensation when she showed off her talents on air.

Steph McGovern provided that rare combination of assured confidence, detailed sector knowledge, insightful analysis and expert management across the Conference. She was a critical part in helping to ensure that it was both an outright success and delivered on all of our key metrics.

How to book Steph McGovern for your event