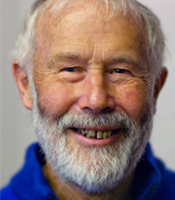 Sir Chris Bonington the mountaineer, writer, photographer and lecturer, started climbing at the age of 16 in 1951 and it has been his passion in life ever since.

Two years later he and Doug Scott made the first ascent of the Ogre (23,900ft.) in the Karakoram Himalaya and had an epic six-day descent, aided by Mo Anthoine and Clive Rowland, through a blizzard, with Doug Scott crawling all the way as he had broken both his legs soon after leaving the summit.  Chris also had a fall and broke a rib, they ran out of food and when at last they reached Base Camp, starving and exhausted, it was only to find that their companions had given them up for lost and abandoned the camp. Despite tales like this, Sir Chris Bonington is still active in the mountains climbing with the same enthusiasm as he had at the beginning.

He has written 17 books, fronted numerous television programmes and has lectured to the public and corporate audiences all over the world. He received a knighthood in 1996 for services to mountaineering, was president of the Council for National Parks for 8 years, is Non Executive Chairman of Berghaus and Chancellor of Lancaster University.

Sir Chris Bonington has an established reputation as an outstanding motivational speaker. He uses the superbly illustrated story of his two major expeditions to Everest as a case study that is linked and tailored to the needs of the client. He has spoken to blue chip companies and organisations around the world and is a visiting lecturer at Cranfield School of Management.

Sir Chris Bonington is more than just a mountaineer, writer and lecturer. He is also one of the country's leading motivational speakers for business.  Leading the way with audio-visual presentations Chris is now going digital. This enables him to use his stunning visuals, computer animation and video all together. While Chris talks you through his expeditions, making the links between what he does so successfully on the mountain with business today, you will be inspired, thrilled and more than ready to climb your own Everest.
Presentations include:
Peak of Achievement:
- Identifying the Vision
- The importance of planning
- Leadership
- The principles of effective leadership
- Caring
- Empowering
- Consulting
- Decisiveness
- Team Building

Reaching the highest point on earth requires teamwork of the highest level. Sir Chris Bonington describes his own personal success in at last reaching the summit of Everest in 1985 at the age of 50, as a member of the Norwegian Everest Expedition. The expedition placed eighteen climbers and Sherpas on the summit in three separate ascents, a record for a single expedition. This was possible because of superb planning and organisation, but most of all, because of the quality of teamwork amongst expedition members.   Chris was stretched to the limit in his own bid for the summit and describes how he was helped by his companions. He also shares his thoughts as he approached the summit. He takes the audience step by step up Everest in such a vivid way that they share in the exhilaration of the climb. He constantly draws parallels between the effort on the mountain and the challenges of today’s business and management world.
Climb Everest’s South West Face:
- Visionary Leadership
- Empowerment
- Synergy in Teamwork
- Planning and Organisation
- Determination and Perseverance

The participants will join him on the first ascent of the South West Face of Everest in 1975. It was the largest and most complex expedition ever to leave Britain, tackling what is arguably the most daunting challenge in the history of climbing - Everest the Hard Way. Five strong expeditions had already tried and failed. He will first take participants through the planning process and then on to the climb itself, setting the scene, giving all the relevant information but then asking the delegates for their solutions to the problems involved.   The topics examined are ones of leadership and group dynamics rather than climbing tactics. This ap­proach enables the entire group to participate in the climb, exploring different ways to deal with issues as they occur in his story of the expedition. In the course of the discussion he brings the participants back to their own workday challenges and encourages them to compare these with the issues that we explore on the mountain.   As the story unfolds he involves the group in helping him solve some of the challenges or dilemmas with which he is confronted on the way.

Clients often ask about purchasing books for giveaways and delegate packs. Below you’ll find a selection of products by Sir Chris Bonington CBE. Click the images to view on Amazon's website. For bulk orders, please speak with your Booking Agent.

How to book Sir Chris Bonington CBE for your event