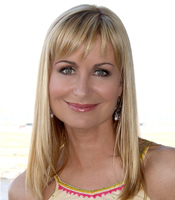 Sian Lloyd is probably best known for her distinctive presenting style on ITV National Weather however, there is much more to Sian than meets the eye.

Most recently Sian has been seen on The Wright Stuff, Ready Steady Cook and Celebrity Bargain Hunt, as well as Daily Cooks Challenge, Britain's Best Dish and Celebrity Masterchef. In 2007 Sian won the TRIC Favourite Weather Presenter Award for the second time, and was also the winner of the 25th annual Rear of The Year award in 2007!

Well known for her participation in ITV's second season of its BAFTA award winning I'm a Celebrity, Get Me Out of Here, Sian has also appeared on Celebrity Stars In Their Eyes and for S4C, she hosted her own quiz show - Risk! As a presenter, Sian has been involved in many weekly and daily programmes, from This Morning to This Week and from Hider in The House to ITV Wales' Welsh Election Coverage. She has also presented climate change documentaries on many of the major channels including CNN.

As well as excellent live skills, Sian Lloyd is also an seasoned journalist, with many column credits on papers including The Mail on Sunday and The Telegraph. Sian is an extremely popular guest on many television programmes including Through the Key Hole, This Morning, Celebrity Countdown, Countdown, The Charlotte Church Show and Richard and Judy to name just a few. In 2009 she appeared in the Vagina Monologues at The Cardiff Millennium Theatre.

Sian Lloyd is a favourite on the corporate award and after-dinner circuit, hosting many events throughout the year. And in her spare time, Sian's a keen hill walker, skier, loves to cook, has travelled extensively and is a keen fashion follower. She also speaks fluent French and Welsh.

How to book Sian Lloyd for your event