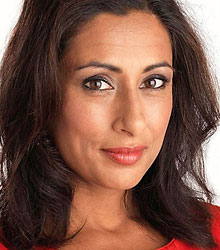 Saira Khan shot to fame in 2005 in the very first series of the The Apprentice and has since taken the UK by storm never being off our TV screens.

As well as TV presenting Saira is a regular contributor to the UK’s media and writes guest columns in national newspapers and magazines and has a regular column in the Sunday Mirror.

For the BBC she presented the hit children’s show Beat the Boss and Trade your way to the USA and her 2 x 60 minute documentaries for BBC2 called, Adopting Abroad, Saira’s Story, was shown to great national reviews.

She is a regular and popular guest on This Morning, Good Morning Britain and Radio 2 and 4 and a regular presenter herself on Talk Radio.

She is MD of her own company Miamoo, a luxury range of skin care products. She launched the business in 2006 directly after completing The Apprentice. Having suffered with dry skin all her life and then overcoming the condition through self care using natural ingredients, she wanted to educate parents on how to prevent and heal dry skin conditions and offer a natural range of products that were effective yet kind and gentle on delicate skin.

In 2019 Saira was a contestant on ITV’s Dancing on Ice.

Saira Khan is a regular corporate keynote speaker on business start up, women in business, British Muslim integration, self development and sales training and her adoption journey.

However, the most popular subject Saira gets asked to talk about is her time and experience on “The Apprentice”. As a finalist of the first series she is respected for her “Can Do” attitude and her exceptional sales skills. She gave inspiration to every woman watching when she was asked about how she felt as the only female left in the competition, she answered, “I am equal to any man out there”.

Saira Khan’s straight talking, no nonsense approach makes her an energetic and captivating speaker. Her business insight comes from starting her own business rather than text books or theories. A born entrepreneur she honed her skills by working in various Blue Chip industries and in different roles ranging from a sales Exec to a Sales Director. She has worked for Burton’s Biscuits, McVities and KP, Workthing.com and Yell. She has sold everything from Biscuits to advertising.

She was invited by the then Director General of the BBC Mark Thompson to speak to a senior BBC leadership event; by Ian Duncan Smith to present an Award at his Social Cohesion event; by the CEO of Women in Film and Television to present at their Awards ceremony; by Mother and Baby to co-host their awards; by Mama and Papa’s to MC their Midwife of the Year event and by the Dutch public broadcasting TV to be their MC for the European Diversity Show.

Clients often ask about purchasing books for giveaways and delegate packs. Below you’ll find a selection of products by Saira Khan. Click the images to view on Amazon's website. For bulk orders, please speak with your Booking Agent.

How to book Saira Khan for your event