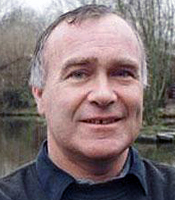 Anyone who watched football in the 1960s and 70s will react to any mention of the name Chopper. To supporters of most clubs, Ron Harris was a brutal villain of the game, a no-nonsense stopper whose very presence on the pitch would raise the temperature by several degrees.

To Chelsea supporters, however, he epitomised a never-say-die spirit that carried the Blues through to FA Cup and European Cup Winners Cup success. His record of 655 League games for Chelsea is unlikely to be bettered and is a lasting testimony to a man who always gave 110% to his club. Ron always believed that even if his team was losing 2-0, with two minutes to go, there was always a chance of a result and his enthusiasm fed the rest of the team.

A professional footballer to the core, Ron was one of the best man-markers of his generation, as scores of his fellow pros will testify. A hard and unflinching player, Ron could also play a bit, as his hours of practising ball control as a youngster paid off.

Harris remained ever-present on the Chelsea side during the turbulent late 1970s before finally leaving in 1980 to become a player-coach at Brentford, having played a record 795 games for Chelsea.

He is now a football pundit (especially on Chelsea), an in-demand after-dinner speaker and recently penned an autobiography, "Chopper: A Chelsea Legend". He also has a suite named after him at Stamford Bridge, in honour of his legendary status at the club.

Clients often ask about purchasing books for giveaways and delegate packs. Below you’ll find a selection of products by Ron 'Chopper' Harris. Click the images to view on Amazon's website. For bulk orders, please speak with your Booking Agent.

How to book Ron 'Chopper' Harris for your event