One of the UK's most prolific comedians and a leading playwright 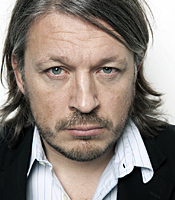 Richard Herring has enjoyed phenomenal success as a writer and performer and is an innovator in the world of podcasts. In 2017 and 2018 he toured his new show Oh Frig, I’m Fifty! which was also released on DVD and online.

In 2016 Richard performed a season of shows at the Leicester Square Theatre which saw him revive each of his eleven consecutive stand-up shows for just one night only before debuting a brand new hour on the final night, Happy Now? which he then toured across the UK.

Richard’s audio podcast and sketch show As It Occurs To Me won a Chortle Award and was Sony-nominated. Richard relaunched the show off the back of a phenomenally Kickstarter campaign in 2017. He put out both audio and video versions of each show. Richard Herring’s Meaning of Life was an independently produced web series performed in front of a live audience and broadcast via the internet for free and he is currently developing a ‘multiple universe’ sitcom entitled Everything Happens (For No Reason) with Channel 4. 2017 also saw Richard write and star in a four-part comedy drama series for Radio 4, Relativity, which also starred Alison Steadman and Phil Davis and was renewed for a new series which will air in 2019.

Richard’s has appeared as a guest on shows including Alan Davies’ As Yet Untitled (Dave), Pointless – Celebrities (BBC One), House of Games (BBC2), Argumental (Dave), Set List (Sky Atlantic), Have I Got News For You (BBC One) and Never Mind the Buzzcocks (BBC2). He also wrote and performed two series of Richard Herring’s Objective for BBC Radio 4.

Richard has written and appeared in a number of critically acclaimed plays that have been performed at the Edinburgh Festival, including Rasputin, Punk’s Not Dead, Excavating Rita and It’s Not the End of the World. His one-man Edinburgh shows include the critically-acclaimed What is Love Anyway?, We’re All Going to Die, Christ on a Bike and Hitler Moustache. Richard’s blog Warming Up has gained a cult following since he started it in November 2002 and he has written an entry for every single day since it began, making it what is believed to be the second longest consecutive daily blog in the world.

As one half of the comedy duo Lee & Herring, Richard Herring wrote and performed in shows such as Lionel Nimrod’s Inexplicable World (BBC Radio 4), Fist of Fun (BBC Radio 1/BBC Two) and This Morning with Richard Not Judy (BBC Two). Richard bought the rights to bring out both series of Fist of Fun on DVD with Stewart Lee via independent Welsh company www.gofasterstripe.com.

With Al Murray, Richard devised and wrote 37 episodes of the sitcom Time Gentlemen Please (Sky One/Paramount) for Al’s alter ego The Pub Landlord. Richard also wrote and starred in the comedy drama You Can Choose Your Friends (ITV1).

Undeniably brilliant…That Richard Herring has been around in comedy for two decades is evident is every aspect of his polished performance. Quick-witted, energetic and with a good dose of school-boyish silliness thrown in, Richard's performance is superbly suited for a corporate audience; his experience allowing him to perfectly gage the audience sense of humour. A real treat; a guaranteed crowd pleaser!

Thanks so much. The guy's a genius! Directly responsible for me losing any religion I had left though!

Probably Richard Herring's finest show to date in a career already littered with great shows. In an attempt to work out why he is who he is, this fine comedian goes back to his memories of school. Brilliant.

Richard was great and went down very well with the audience. I got very positive feedback. Please pass on our thanks

Please pass on our thanks to Richard. He was absolutely brilliant last night, and dealt with a chatty crowd expertly. Lots of people mentioned how good they thought he was.

Clients often ask about purchasing books for giveaways and delegate packs. Below you’ll find a selection of products by Richard Herring. Click the images to view on Amazon's website. For bulk orders, please speak with your Booking Agent.

How to book Richard Herring for your event