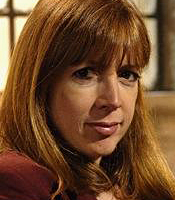 Rachel Elnaugh is the award winning entrepreneur whose first business was the market leading ‘experiences' brand Red Letter Days, which she created at the age of 24 and grew from nothing, on a shoestring budget, into a £multi-million turnover household name, which at its height was making £1million profit a year.

This won her an Ernst & Young Entrepreneur of the Year Award in 2002 and she was shortlisted for the 2001 Veuve Clicquot Businesswoman of the Year Award along with Barbara Cassani, Jo Malone, Sly Bailey and Chey Garland.
As a result of being on the Awards circuit, in 2002 she was invited by the BBC to be part of a new business show they were formulating called ‘Dragons' Den‘.
The pilot for Dragons' Den was filmed in 2003 and the first series was commissioned and filmed in Autumn 2004, airing for the first time in January 2005. Dragons' Den has been a huge success, shortlisted for a BAFTA and very quickly syndicated worldwide. The second series aired in 2005.

However, behind the scenes, Rachel Elnaugh had been struggling to bring Red Letter Days back on track after a disastrous over-expansion in 2002, and despite the business being back in profit and having £3.3million cash at bank it was forced into administration by Barclays Bank on 1 August 2005. Due to her high profile appearance on Dragons' Den, the crash of Red Letter Days attracted huge media exposure, the story appearing on all the key news channels and in every mainstream newspaper.

However, to paraphrase Napoleon Hill, in every adversity lies the seeds of opportunity and Rachel was invited to speak at many enterprise events about her experiences. She was also commissioned to write a book about the fine line between success and failure in her book ‘Business Nightmares‘ – not just her own story but the story of 20 other successful entrepreneurs who hit problems on their own journey. The timing of the book launch in May 2008 could not have been more fortuitous as in September 2008 the global banking system crashed triggering the current recession and many other business meltdowns. 'Business Nightmares‘ has since become THE handbook for business survival for many struggling entrepreneurs.

Rachel Elnaugh was quickly invited by many entrepreneurs to help them with their own business and she became a mentor to many, creating along the way a series of low cost training programmes and workshops designed to help entrepreneurs struggling to make their business work. Rachel combined her business and marketing knowledge, her experience of going through a financial wipeout together with her knowledge of metaphysics into her acclaimed 2012 low cost video mentoring programme Business Alchemy, which has already become her most successful mentoring product ever.

Rachel's latest and biggest business venture yet is SourceTV the new business operating platform for thought leaders, holistic professionals, alternative therapists and coaches which she co-created with Hollywood based TV/Video and Digital Marketing Expert Kevin Stein.

Rachel Elnaugh is an accomplished business speaker, having been on the professional speaking circuit since her rise to fame as a ‘Dragon’ in the first two series of BBCTV’s acclaimed business show Dragons’ Den in 2005 – successfully delivering over four hundred speeches, events, seminars, workshops and presentations to thousands of business owners and entrepreneurs both in the UK and the US, Europe and Asia.

She has undertaken events for a diverse variety of clients including the Institute of Directors, Harvard University, the CBI, the Conservative Party Conference, Scottish Parliament, HSBC, John Lewis, Marketing Week, Cass Business School, Oxford Debating Society and the Mind Body Spirit Festival – as well as speaking at many schools and universities.

Rachel also made her debut as a stand-up comedienne at The Comedy Store on 22 November 2010 in a charity event for London Business Forum which raised £12,000.

As well as her acclaimed ‘Entrepreneurial Rollercoaster’ keynote speech, Rachel Elnaugh speaks on a variety of business related topics and always tailors her presentation to the client and the brief for the event. Past subjects have included:

As part of her involvement in any event Rachel always helps event organisers, where requested, to promote their event both via her database of fans and followers and her 10k+ Twitter following, as well as via any Press or PR interviews required of her either on the day or in advance of the event.

Not only did you storm it at the Black Pearl Dinner, you won the hearts and minds of every single person in that room.

Clients often ask about purchasing books for giveaways and delegate packs. Below you’ll find a selection of products by Rachel Elnaugh. Click the images to view on Amazon's website. For bulk orders, please speak with your Booking Agent.

How to book Rachel Elnaugh for your event