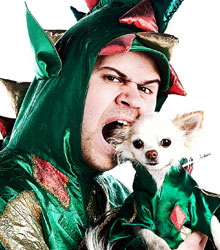 Book Piff The Magic Dragon
add to shortlist
About

The stand out star of ITV1's Penn & Teller: Fool Us. Imagine Jack Dee in a dragon suit performing jaw-dropping magic tricks and you're on the right track.

With over 10 million YouTube hits to his name, Piff performed live to over 200,000 people in 2012, including The Secret Policeman's Ball with The Muppets at Radio City Music Hall, a hit nine night solo season at Sydney Opera House and opening for Mumford & Sons on their UK tour.

His sidekick, Mr Piffles, the world's first magic performing chihuahua, accampanies Piff The Magic Dragon on his many adventures and has been levitated, laminated, shackled in a strait jacket and shot out of a cannon all in the name of entertainment.

Piff The Magic Dragon is available for corporate and private events. His standard set is around 10-20 minutes but can perform longer sets if required.

Just one thing though... they don't do children's parties!

One of the most magical things we've ever seen.

Just gets funnier every time.

Charm and charisma shine through.

How to book Piff The Magic Dragon for your event

Tags for Piff The Magic Dragon