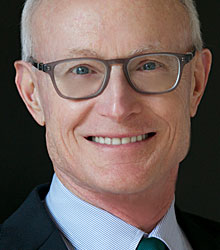 Harvard Business School Professor Michael E. Porter is the world's most influential thinker on competitive strategy and international competitiveness, and speaks widely on these topics to business and government audiences throughout the world. He also leads the Institute for Strategy and Competitiveness, created jointly by Harvard University and Harvard Business School to further his work.

His work forms the foundation of Harvard's required course on strategy and appears in the course content of virtually every business school in the world. He leads Harvard's executive education programs for CEO's of billion-dollar and larger corporations. Michael Porter is the Bishop William Lawrence University Professor at the Harvard Business School.

Professor Porter has written 16 books and more than 100 articles, and has produced bodies of work in several subcategories of competition, including the influence of location on competition, the role of private capital investment in competitiveness, and the relationship between competition and society. His book, Competitive Strategy, is in its 58th printing and has been translated into 17 languages. His second major strategy book, Competitive Advantage, is in its 34th printing. On Competition is a select collection of Porter's writing, plus two new pieces that tie the range of his work together.

With Jeffrey Sachs, Professor Porter has led the research to create the Global Competitiveness Report, an annual ranking of the competitiveness and growth prospects of 75 countries. He served as advisor on competitive strategy to many leading US and international companies, to community organisations, and to numerous foreign nations and groups of neighbouring countries. His work has led to a long-term initiative formed by the heads of state of Central American countries called the Latin American Centre for Competitiveness and Sustainable Development, a permanent institution based in Costa Rica.

Michael Porter has conducted extensive research on economic development in America's distressed inner-city areas and is the founder, chairman, and CEO of The Initiative for a Competitive Inner City (ICIC) a non-profit, private-sector initiative to catalyse inner-city business development across the country.

Professor Porter plays an active role in US economic policy with the Executive Branch, Congress, and international organisations. He is a member of the Executive Committee of the Council on Competitiveness, a private-sector organisation made up of heads of major corporations, unions, and universities, and has provided intellectual leadership for much of the Council's work. With ideas that have touched so many, Michael Porter is one of the most influential economic experts of our time.

Clients often ask about purchasing books for giveaways and delegate packs. Below you’ll find a selection of products by Michael Porter. Click the images to view on Amazon's website. For bulk orders, please speak with your Booking Agent.