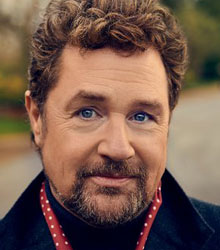 Michael Ball has won critical and public acclaim over the last 25 years with his dynamic, award-winning lead roles in the West End and on Broadway. And, with his concurrent career as a multi-platinum recording artist, top selling live concert performer and radio and television broadcaster, the Olivier-Award winning Ball has been, for many years, in the enviable position of combining these individual aspects of show business with continuing success.

Michael Ball is a hugely successful concert artist; he has performed many times in theatres and venues across the UK as well as Australia, the US and the Far East. His many television shows have included Michael Ball, An Evening With Michael Ball, The Michael Ball Show and, for BBC Radio 2, Ball Over Broadway, Michael Ball's Sunday Brunch and the 2012 six part series, Songwriting Partnerships.

In August 2007 Michael made his BBC Proms debut with An Evening With Michael Ball at the Royal Albert Hall which marked the first time a musical theatre star had been given a solo concert at the classical music festival. Michael also performed at the 10th anniversary concert of Les Miserables at the Royal Albert Hall and the show's 25th anniversary concert at the 02 Arena.

Clients often ask about purchasing books for giveaways and delegate packs. Below you’ll find a selection of products by Michael Ball. Click the images to view on Amazon's website. For bulk orders, please speak with your Booking Agent.

How to book Michael Ball for your event