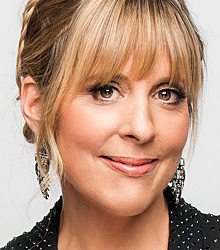 Television presenter, actress and comedian, the immensely versatile and talented Mel Giedroyc is best known as one half of the acclaimed and firmly established comedy duo Mel and Sue, both on the screen and radio.

Mel Giedroyc was born in Epsom, Surrey and grew up in nearby Leatherhead. Her father, a history writer, is Polish and came to the UK in 1947. She attended the independent Oxford High School, Oxford and then attended Trinity College, Cambridge, graduating with a 2:2 degree in Italian language and literature.

A presenting partnership for more than 20 years, Mel and Sue met while students at the University of Cambridge and were members of the Footlights comedy club. Together they have hosted numerous TV series including Light Lunch for Channel 4 and more recently, The Great British Bake Off for the BBC.

Mel also been a presenter on Channel 4's RI:SE, Celebrity Driving School, Collectoholics and Richard Hammond's 5 O'Clock Show (Co-presenting). She was also a celebrity judge on the 2007 edition of Making Your Mind Up alongside John Barrowman. She starred as one of the presenters in the show Eurobeat: Almost Eurovision! at the Edinburgh Fringe and subsequently in the West End at the Novello Theatre.

As a performer, Mel has been involved in some of the most acclaimed comedies, such as French and Saunders (as performer and writer), Gimme Gimme Gimme, Blessed, Miranda and The Vicar of Dibley.

Mel Giedroyc is a consummate professional host and presenter for live events, either solo or alongside Sue Perkins — also available via NMP Live — and is highly sought-after for her natural charisma, charm and relaxed down-to-earth personality.

Clients often ask about purchasing books for giveaways and delegate packs. Below you’ll find a selection of products by Mel Giedroyc. Click the images to view on Amazon's website. For bulk orders, please speak with your Booking Agent.

How to book Mel Giedroyc for your event