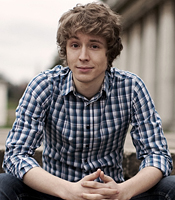 Matt Edmondson started his broadcasting career as a presenter for CBBC. He went on to become a celebrity interviewer for the gossip site HolyMoly.com, where he interviewed a range of celebrities including Sir Alan Sugar, Flo Rida and Spike from 911. Highlights included being cradled like a baby by Mr T, and uncovering Simon Cowell's secret past as a judger of dog shows.

Matt Edmondson's TV work has included the Isle of Wight Festival for ITV2, T in the Park for the BBC and music show Freshly Squeezed for Channel 4, as well as being part of the T4 presenter line-up.

Matt joined Radio 1 in January 2010 to provide a round-up of celebrity news on Fearne Cotton's Friday show, before being drafted in to cover Sara Cox's Sunday show while she was on maternity leave. In April 2011 Matt was given his own weekly show on Radio 1.

How to book Matt Edmondson for your event