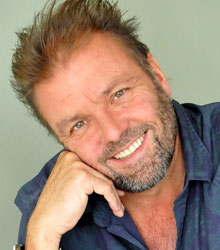 Martin Roberts is one of the UK's most respected Property, Travel and Lifestyle TV presenters and journalists. Over the past 20 years he has appeared on BBC TV and Radio, ITV, CNN and SKY TV. He was a regular presenter on ITV's top rated travel show ‘Wish You Were Here..?' for 8 years and the travel editor of ‘Woman' magazine for 15 years.

For nearly 10 years he has written and co-presented, alongside Lucy Alexander, the hit BBC property auction show ‘Homes under the Hammer', which is shown on BBC1, BBC Worldwide and UKTV Home and is now in its 16th series. He is also the BBC's UK and Overseas Property expert, appearing as expert speaker on programmes such as ‘BBC Breakfast', ‘BBC News 24', the Jeremy Vine Show and BBC Radios 2, 4 & 5 Live. He is a regular expert guest on The Alan Titchmarsh Show on ITV, and was the weekly Property Columnist for the News of the World.

Martin is the former Chairman of the British Guild of Travel Writers and a board member of the Institute of Travel & Tourism and the AIPP. He is a regular expert contributor to a wide range of publications, including lifestyle and property magazines. He is the author of the best selling Teach Yourself guide Making Money from Property and presents property training workshops around the UK. He has also authored the children's book series ‘Herman and the Magical bus visit The Villes'.

Martin Roberts has delighted numerous corporate clients with his presenting and comparing skills. From creating inspiring promotional and informational videos, to hosting annual conferences and seminars, auctioneering and after dinner speaking.

He captivates audiences of all ages and backgrounds, and subjects covered can range from up to the minute property market analysis to humorous ‘behind the scenes' anecdotes.

1. Charity Auctioneer
Martin has been a very well loved and successful auctioneer at various charity and fundraising events, having beaten time and time again, the charity’s own fundraising targets and expectations.

2. Corporate Host / Compere
Martin has worked alongside numerous organisations to host or compere specific events. From the National Landlords’ Association conference and the Lincolnshire Chamber of Commerce awards, to the Staffordshire Women’s Institute and Institute of Travel and Tourism AGMs.

He is comfortable working to a script or ‘ad lib’ and can interview anyone from members of the public to CEOs’. His relaxed style and friendly approach puts all at their ease and brings the best out of any interviewee.

3. Guest / After Dinner Speaker:  Martin has appeared as a guest speaker at various corporate conferences and events, entertaining the audience with presentations about the state of the property market, advice on buying property at auction or anecdotes from his time on ‘Homes under the Hammer’ and ‘I’m a Celebrity, Get Me out of Here’.

4. Expert / Celebrity Lecturer: Martin has been a guest lecturer on P&O and SAGA cruise ships, recording high customer feedback ratings. Other cruise ship engagements are in the pipeline.

5. Expert Interviewee: Martin is often invited to appear on news based television and radio shows, to provide expert comment or opinion on current property stories. This includes local and national BBC TV, ITV, Channel 5 and SKY, as well as other radio, newspapers, magazines and on-line platforms.

You did a great job linking all the presentations using both gravitas and humour. You also got the panel session buzzing which I suspect we could have run for another hour without losing the momentum...

Martin Roberts is a very charming, warm person, who was so keen to help us, and his presence at the event made it all the more special.

Your recent presentation on the current state of the UK property market to the lawyers, barristers and judges attending our annual conference was extremely well received...

I would like to extend our most grateful thanks to you for being the auctioneer at our Summer Ball held at Blenheim Palace last weekend...

Clients often ask about purchasing books for giveaways and delegate packs. Below you’ll find a selection of products by Martin Roberts. Click the images to view on Amazon's website. For bulk orders, please speak with your Booking Agent.

How to book Martin Roberts for your event