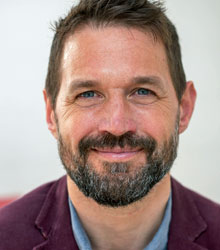 A therapeutic meditation teacher and television presenter, Alistair Appleton is best know for his 14 years presenting BBC2's Escape to the Country, filmed across the length and breadth of the British countryside and regularly pulling in two million viewers every week.

However, it was in the millennium year, alongside his successful career in television, that Alistair Appleton began his serious involvement in meditation.

Trained mainly in the Buddhist tradition, Alistair took refuge with Lama Yeshe Rinpoche, the abbot of Samye Ling Monastery in 2000 and sat several retreats at this extraordinary monastery in the Scottish borders and in the meditation hermitage on Holy Island near Arran.

In the following years, however, it was the simpler, more direct teachings of the Thai Forest tradition that caught Alistair’s attention. He studied at Chithurst Monastery in Sussex with the sangha around Ajahn Sumehdo and completed a retreat at the famous training monastery in Thailand, Wat Pah Nanachat. He also studied with the teacher Ajahn Amaro who is abbot at Abhayagiri Theravadan monastery in Mendocino County, California.

Since 2004, Alistair has also drawn inspiration from outside the Buddhist world, working with the shamanic practices of the Amazonian Indians in Brazil. This colourful and powerful practice has brought him back into contact with the more shamanic aspects of Tibetan meditation. He is currently studying with the contemporary Vajrayana teacher, Reggie Ray.

And in 2004, his Tibetan preceptor, Lama Yeshe Rinpoche requested Alistair to teach a meditation course for beginners up on Holy Island: his “ABC of Meditation”. Since then he has led numerous courses on mindfulness, compassion training, self-soothing and the creation of joy – many of these weekend courses held in the beautiful Abbey in Oxfordshire.

In 2014, Alistair also completed his MA in Advanced Psychotherapy at the Minster Centre in London. This is an integrative training institute which looks at combining aspects of psychodynamic and humanist therapy and wonderfully complements the work in mindfulness and compassion, Alistair has learnt through meditation.

Alistair's television career stretches back more than two decades, taking in three long-running workhorses of the schedules – Escape to the Country, Cash in the Attic and House Doctor. All of these shows ran for 10+ series with Alistair at the helm.

He began his presenting career in Berlin in the 1990s with a live, internationally broadcast current affairs show which threw him into the presenting deep-end: no auto-cue, simultaneous translations into German, self-penned scripts on a dizzying array of subjects. His two year stint in the news room of Deutsche Welle also gave him a strong journalistic training in saying things accurately but using few words!

Once he returned to the UK in 1999, Alistair’s experience landed him the presenter job on Five's hit property show House Doctor alongside Anne Maurice. On the back of that popular partnership, his media profile rose. He presented BBC Breakfast live from Bath, the Tate Modern and the BBC Proms. He travelled widely hosting BBC Holiday and showcasing beautiful beach-side properties in UKTV Home's Fantasy Homes by the Sea, as well as shopping for homes and bargains in Uncharted Territory and Foreign Exchange, both for the BBC.

Alongside the many series that Alistair has fronted he's also pursued his great love of classical music, hosting three seasons of the BBC Proms for BBC4 and presenting the Radio 3 weekend breakfast show. He was also the permanent host of the format-breaking Nightshift, a popular late night concert series by the Orchestra of the Age of Enlightenment which brings baroque music to the Roundhouse and underground Shoreditch venues.

Alistair Appleton’s lively, non-dogmatic presentations and workshops seem to appeal to a very broad audience not usually attracted to spiritual practice and his easy manner brings the techniques of meditation alive for a practitioner living in the modern world.

He is interested in combining the worlds of therapy and meditation in new directions — leading workshops and giving motivational keynote speeches on anxiety, dissociation, LGBT shame, trauma, mindfulness and the issues arising for gay men in the world with the need for embodiment in our digitalised world; something that has never been more relevant than in today’s society and especially the workplace.

Reduce stress by understanding how the brain works
Alistair Appleton combines his training as a psychotherapist with more than a decade’s study and practice in the Buddhist meditation tradition, in order to maximise the way meditation practice can really help. Not only by reducing stress or taking us to altered states but also by understanding how the human brain works in the world. How we relate to one another and how problematic patterns get entrenched.

A safe and progressive ‘space’ for people to share
People of any religious belief or none, any political stripe or none are very welcome to participate in Alistair Appleton’s motivational presentations and courses. However, he prides himself on offering a safe and progressive space for everyone to share their own experience.

How to book Alistair Appleton for your event