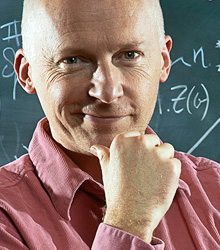 Marcus du Sautoy is a mathematician, broadcaster and author who is currently the Charles Simonyi Professor for the Public Understanding of Science.

Marcus is also a Professor of Mathematics at the University of Oxford and a Fellow of New College. In 2001, he won the prestigious Berwick Prize of the London Mathematical Society awarded every two years to reward the best mathematical research made by a mathematician under 40.

In 2004, Esquire Magazine chose Marcus du Sautoy as one of the 100 most influential people under 40 in Britain and in 2008 he was included in the prestigious directory Who’s Who. In 2009 he was awarded the Royal Society’s Faraday Prize, the UK’s premier award for excellence in communicating science.

He received an OBE for services to science in the 2010 New Year’s Honours List. He also received the Joint Policy for Mathematics Board Communications Award for 2010 and the London Mathematical Society Zeeman Medal for 2014 for promotion of mathematics to the public.

Marcus du Sautoy is also author of the best-selling mathematics book, The Music of The Primes published by Fourth Estate in 2003 and translated into 10 languages. It has won two major prizes in Italy and Germany for the best popular science book of the year.

Marcus du Sautoy writes for the Times, Daily Telegraph, Independent and the Guardian and is frequently asked for comment on BBC radio and television. For several years he had a regular column in the Times called Sexy Science. He was presenter of BBC4’s TV game show Mind Games, for which he was nominated for the Royal Society of Television’s Best Newcomer to a Network award.

In 2005, Marcus presented a one hour documentary for BBC4 and BBC2 based on his book The Music of the Primes. In autumn 2008 he wrote and presented a four part landmark TV series for the BBC called The Story of Maths.

He has presented five BBC Horizons including Alan And Marcus Go Forth And Multiply” co-presented with comedian Alan Davies and The Secret You, a film about the science of Consciousness.

In 2010, Marcus presented a six part TV series for BBC called The Beauty of Diagrams. Then, in summer 2011, he is presented a three part landmark series called The Code broadcast on BBC2 to huge critical acclaim. In 2012, he took part in the BBC’s programme Maestro at the Opera making it through to the final where he was beaten by Craig Revel Horwood.

In 2013, Marcus presented the three part series Precision: the measure of all things. He currently co-presents the School of Hard Sums on Dave with comedian Dara O’Briain.

• How does Maths predict the future?
• Big Data & AI (Artificial Intelligence)
• How maths can provide creative solutions in business

Clients often ask about purchasing books for giveaways and delegate packs. Below you’ll find a selection of products by Professor Marcus du Sautoy OBE. Click the images to view on Amazon's website. For bulk orders, please speak with your Booking Agent.

How to book Professor Marcus du Sautoy OBE for your event

To book Professor Marcus du Sautoy OBE, please submit an online enquiry, email bookings@nmp.co.uk or speak with one of our booking agents on +44 (0)1372 361 004.