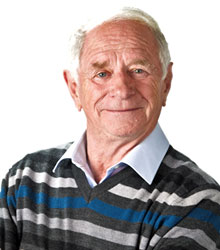 In the late 1970s and 80s he became TV's best-loved mathematician, presenting more than 23 solo children's television series about maths and science including the iconic Think of a Number (BBC) and Johnny Ball Reveals All (ITV). He has since produced numerous science-related musicals and lectures regularly on the after dinner speaking circuit.

No-one is better known for making maths not just easy to understand but genuinely fun and fascinating. Johnny's TV shows and videos won 12 awards, including a BAFTA., a New York International Emmy nomination, and the ITVA "Presenter of the Year" Craft Award. In 2012 he was the oldest ever contestant on the BBC's Strictly Come Dancing.

Johnny Ball has three honorary doctorates in Science from Glasgow (1997) Sheffield Hallam (1998) and Salford Universities (2001), is a Fellow of the RSA. Lord Rector of Glasgow University 1994/6; President Nat Assoc for Gifted Children 1991/7; has written 8 books, devised GET SET which puts 400 girls through 26 projects at Imperial College annually, opened the Science Museum's Launch Pad and hosted its 10th Anniversary.

Recent education campaigns include Maths for ASDA, McVities and Sainsbury's Booktrust, and for SEEDA and is a Maths, Science and Educational pundit, featuring frequently on radio and TV.

Clients often ask about purchasing books for giveaways and delegate packs. Below you’ll find a selection of products by Johnny Ball. Click the images to view on Amazon's website. For bulk orders, please speak with your Booking Agent.

How to book Johnny Ball for your event