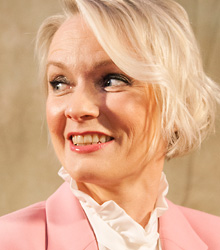 In November 2016, Lorraine Candy was appointed to the newly created position of Luxury Content Director of the Sunday Times and Editor-in-Chief of Style.

Prior to this, Lorraine spent twelve years as Editor-in-Chief of Elle Magazine, the world's biggest fashion magazine. Lorraine led Elle through a complete ‘reboot' after returning from maternity leave, making the magazine unique in its cutting-edge approach to modern publishing. It is the only luxury magazine brand to have a fully integrated editorial team producing content across all brand platforms – print, digital, mobile and social media.

Lorraine Candy was named by the Press Gazette among the top 50 most influential people on Twitter in 2014 – the only glossy magazine editor to be included – and Elle is by far the most ‘liked' glossy magazine brand on Facebook. She joined Elle UK in 2004 after working at Cosmopolitan where she was editor-in-chief, and she has over a decade of experience as a captain of industry.

In her first 5 years at Elle, the magazine won 10 awards, including Candy's consecutive wins of the BSME women's monthly Editor of the Year award, in 2009 and 2010. Her editorship of Elle UK saw the magazine increase its fashion content, take on board unexpected writers, including Nick Hornby and Rebecca Miller, and woo more controversial and commercial cover stars.

Lorraine Candy has worked in journalism all her life, beginning aged 16 when she took her first job at her local newspaper,The Cornish Times.Lorraine then went on to be a features writer at the Daily Mirror,columnist for the Daily Mail,The Sun's women's editor and features editor at The Times,where she was also appointed deputy editor of the paper's Saturday Magazine,and oversaw the supplement's re-launch. She writes for The Daily Mail, The Guardian, The Times and Observer Woman.

Lorraine Candy speaks about fashion, retail business and women in the workplace.

I would like to say a big thank you to Lorraine for her time today taking part in The Conversation by Grosvenor, we were delighted with the webinar and thought Lorraine did a fab job of getting a lot out of the speakers... the session flowed really well.

How to book Lorraine Candy for your event