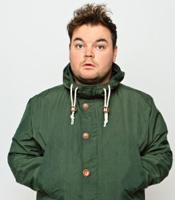 Since starting comedy in 2009, Lloyd has quickly established himself as one of the most natural, brightest and original comedians on the circuit andnow regularly performs at some of the largest clubs in the UK.

Lloyd’s love of Grimsby Town FC goes beyond supporting them at the terraces. Just before Christmas 2014, his ‘Grimsby Town FC Christmas message,’ which was written and produced by Lloyd, as well as starring in it went viral and appeared in pretty much every news website.

In 2014 Lloyd made his solo Edinburgh debut at The Pleasance withVoice of an Angel, Body of Truckeras well as leading the choir in Nick Helm’sTwo Night Stand in The Grand. Prior to this Lloyd performed in Edinburgh as part of the prestigious AAA Stand-Up showcase in 2012 and then the Big Value Comedy Showcase in 2013 as well as appearing in Charlie Baker’sBaker’s Dozen.

In 2016, Lloyd Griffith will star as the face of the FIFA 16 campaign as he travels the world on his quest for the ultimate football team.

Expect to hear more from Griffith

His sense of fun is infectious, his singing voice faultless and his anecdotes are told with boundless confidence. Griffith has clearly established his own style of comedy.

The next big thing

How to book Lloyd Griffith for your event