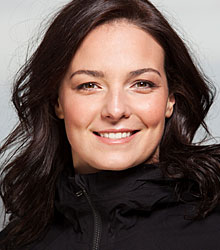 At the FINA World Championships in 2011 and 2009, Keri-Anne Payne won Gold in the 10k marathon swim, following the Silver Medal she won at the Beijing Olympic Games in 2008. Her successes led to an explosion of public interest and participation in open water swimming events in the UK and worldwide.

These achievements, combined with her easy going nature and charismatic personality enabled her to be at the forefront of the sport's ever growing appeal, with her winning both the LEN and FINA Female Open Water swimmer of the year award for 2011.

Keri-Anne Payne was born in Johannesburg, South Africa to British parents. She started swimming aged four, and was noticed aged eight by British Swimming's national performance director Bill Sweetenham at a training camp in South Africa. As a result, the family returned to the UK to live in Greater Manchester, when she was 13.

Keri-Anne was pipped at the post in London 2012, coming 4th in the 10k marathon swim held in London's iconic Serpentine in Hyde Park. But her talents don't just stop in open water events. In the pool at the 2010 Commonwealth Games in Delhi, Keri-Anne won a bronze medal in the 400m Individual Medley, confirming her status as a brilliant all round swimmer.

Out the water, Keri-Anne has strong family support and is an ambassador for Skill Force, a charity organisation that helps young people achieve vocational qualifications through a range of activity based projects.

Keri-Anne Payne is focussed on becoming a professional broadcaster and commentator when her swimming career comes to a close, and with her glamourous image and natural charm – allied to a steely determination – she looks well set to achieve her goal.

How to book Keri-Anne Payne for your event