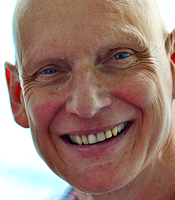 Duncan Goodhew remains one of the most respected and recognisable sportsmen in the UK, having won two Olympic medals in the 1980 Moscow games. He was awarded an MBE for services to sport in 1981.

Duncan was captain of the Great Britain swimming team where he became an Olympic 100m breast stroke Gold Medallist and Bronze Medalist for the 4 x 100m medley relay. Duncan's television and other media appearances over the last 3 decades - together with his impressive athleticism - have combined to make him a household name and legend in British athletics.

The intervention of fate shaped Duncan Goodhew's life when he was just 10 years old. He fell 18 feet from a tree and as a result of damage to a nerve in his lip, lost every hair on his body. Already diagnosed as dyslexic, he condemned himself as 'a stupid oddity' but acquired the desire to overcome his disadvantages, harnessing a natural forte for swimming that spurred Duncan on to become an Olympic winner.

Duncan's amazing success with BT Swimathon is well known, from it's inception in 1988, Swimathon has raised over £10m for worthwhile causes and is one of BT's most profitable and highly regarded sponsorship campaigns. He has been instrumental in the success of the BAA Youth Games, encouraging young people to participate and attain their goals. Duncan Goodhew, together with other legendary athletes including Sally Gunnell, Steve Cram and Trevor Brooking do a brilliant job by giving their time and encouragement to thousands of youngsters. With his charismatic personality and Olympic achievements, Duncan is a role model for the young.

Duncan Goodhew's substantial sporting and business experience, combined with his affable manner, informed approach and articulate delivery, make him a natural and highly sought-after choice for manner of corporate events. Since winning Olympic Gold in 1980, Duncan has presented hundreds of motivational speeches to many of Britain's leading Blue Chip and FTSE100 companies, including Exxon, Prudential, IBM and Coutts. He also set up an Executive Survival Clinic for Coopers & Lybrand.

Duncan Goodhew is first and foremost a motivational speaker, but with many anecdotes and funny stories, he is also popular on the after dinner speaking circuit, as well as being available for celebrity sporting personal appearances and team building activities.

In his book Sink or Swim, Duncan talks about the challenges of competitive swimming - where your skill is judged on a performance lasting just a few minutes. He explains how he set targets and stayed motivated, despite the pressure of the expectations of people around you, and shows how the same rules apply both in a home and professional environment.

Clients often ask about purchasing books for giveaways and delegate packs. Below you’ll find a selection of products by Duncan Goodhew MBE. Click the images to view on Amazon's website. For bulk orders, please speak with your Booking Agent.

How to book Duncan Goodhew MBE for your event