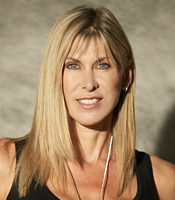 Sharron Davies occupies a unique position in British life. In an age of increasingly fleeting fame and notoriety, she has been one of the UK's best known and most popular sportswomen since bursting onto the scene as a 13 year old Olympian in 1976. More than 30 years later she is still a popular, in demand and much admired character.

Having first swum for Britain at the extraordinary age of 11 she was selected for the 1976 Montreal Olympics and instantly became a household name. At only 14 she confirmed her talents by winning two European Bronze medals – only losing out to the then all conquering East Germans.

But it was in 1978 that 15-year-old Sharron stormed to the first of her many successes winning Commonwealth gold medals in both 200 and 400m Individual Medley events.

Her astonishing form continued and in 1980 she took a battling silver medal at the Moscow Olympics finishing just behind Petra Schneider of East Germany. Ms Schneider has since admitted that her performance was heavily drug enhanced. An emotional reunion between Sharron and Petra was subsequently the subject of a captivating Channel 4 documentary.

As is often the case with prodigies whose success and stardom arrives so early, Sharron decided she needed a break from training and competition and ‘retired' at the age of 18 to pursue a media career. However the lure of the water proved too much and she returned in 1989 and promptly regained her national 200m title.

As ladies captain of Britain's 1990 Commonwealth Games squad she led by example and returned with silver and bronze medals.

Twice voted British Press Sportswoman of the Year, Sharron's incredible international career spanned three decades, included numerous major titles and medals, 200 British records, some of which stand to this day (including the 20- year-old 400 IM record), 5 World Masters records and an MBE awarded by the Queen for services to sport.

Retiring from competition in 1994 Sharron has become a regular on television and in the press. As a key member of BBC television's commentating and presenting team she has covered many major events including the Seoul, Atlanta, Sydney, Athens and Beijing Olympics. The London Games will be her 10th Olympiad as a competitor or broadcaster.

As patron of Disabled Sport England and The Sports Aid Foundation Sharron devotes much time to charity. But it is with her very own annual swimming event Swim For Life that she has become widely known. Launched over 20 years ago with Princess Diana - it involves 2,000 pools nationwide - and has since raised millions of pounds for different causes.

I would like to thank you for arranging Sharron Davie's visit to our school. She was an excellent guest. Her manner, friendliness and approachability were absolutely in line with what we were looking for to mark the event. Our staff, parents and children were thrilled to have her as our special contributor to Dene's Grand Opening and we cannot thank her enough for making it so special.

How to book Sharron Davies MBE for your event