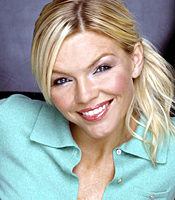 Kate Thornton is a talented and versatile presenter. She started her career as a journalist becoming the youngest ever editor of Smash Hits in 1995.

She has written regularly for The Daily and Sunday Mirror, The Sunday Times and was a Contributing Editor for Marie Claire.

Her presenting credits include some of the most high profile programmes on British Television including Top of The Pops, Holiday, The Royal Variety Performance and Pop Idol Extra. She has hosted her own music show on VH1 with Jono Coleman, as well as a raft of live programmes including The Bafta’s, The Brits and a live Madonna webcast from the Brixton Academy.

Kate Thornton has also presented three series and a celebrity special of ITV's The X Factor and co-presented Comic Relief for BBC1. Her other shows have included Loose Women, Anorexia - My secret Past and a number of years hosting the Strictly Come Dancing Live Tour. She has presented a number of shows for BBC Radio 2 including several series of Peper Cuts and Lines of Enquiry, as well as a two-part special on pop legends Bros.

Most recently, Kate has hosted web series Royal Box and the hit podcast White Wine Question Time (both for Yahoo!) with guests including Amanda Holden, Leigh Francis and Julie Graham.

In 2019, Kate also launched a jewellery collection, in collaboration with Bibi Bijoux and QVC.

How to book Kate Thornton for your event