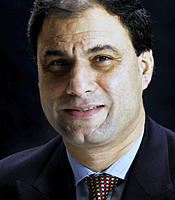 Born on November 26th 1961 in India, Karan started his career at Ernst & Young in 1982, where he spent four years working in audit, tax, training and accounting. It was here Bilimoria began small entrepreneurial ventures, such as selling polo sticks from India to premium London stores such as Harrod's.

He qualified as a Chartered Accountant in 1987, and a year later moved to Cresvale Ltd, London (part of S&W Beresford) as a Consulting Accountant. In 1989 he moved to European Accounting Focus magazine, where he was the Sales & Marketing Director.

As a student, Bilimoria would eat at the myriad of Indian restaurants or curry houses in Britain and soon identified a problem which he turned into a business. When he would order beer with his spicy Indian food, the established lager brands or house beers would cause bloating. This in turn would limit the amount they would spend on food and beer. Even the alternative to lager, real ale, didn't go well with Indian food.

As a result, in 1989 Bilimoria and his business partner, Arjun Reddy, founded Cobra Beers. These beers were brewed of rice, maize and hops for a smoother, less gassy drink.

In the early nineties, Bilimoria and his small sales staff called Indian restaurants around the UK trying to persuade restaurant owners to stock Cobra Beer. Rather than overtly putting down other brands when selling Cobra, Bilimoria explains "we believe customers should have a choice, we just want to make sure one of those choices is Cobra".

Bilimoria made a point to highlight the culture at Cobra as a key to the company's success. "We have no dress code - people can come to work in shorts for all we care. If you give respect and trust to your employees you get trust back". He also had several tips for young aspiring entrepreneurs: "Invest in building a great team, including hiring people to head up marketing/sales, finance, and other functions who are better at it than you. Invest in training your employees. Research and understand your market thoroughly, improve a product or service, and lead, do not follow''.

How to book Lord Karan Bilimoria CBE for your event