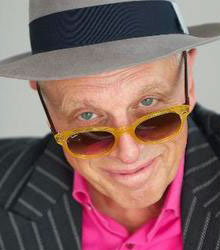 Founder, owner and creative driving force behind all things YO!, Simon Woodroffe left school at the age of 16 and spent 30 years in the entertainment business. His production companies in London and Los Angeles designed and staged concerts for most of the 70's and 80's performers from The Moody Blues to Madness and Rod Stewart to George Michael and events such as Live Aid.

The first YO! Sushi opened in London’s Poland Street on January 22nd 1997, with Simon’s life savings of £200,000 and without any start-up capital. Within a week it had a queue down the block and he never looked back.

A second restaurant soon followed, opening in London’s Harvey Nichols department store. In 2000, YO! Sushi opened their first restaurant outside London, in Manchester's Selfridges. By 2003, the company had twelve restaurants open, and the first franchise opened in Dubai, United Arab Emirates.

Two new franchises opened in 2007; one in Dublin, the other in Moscow. In April 2010, YO! Sushi opened their fiftieth company owned restaurant in Market Place, London. By 2014, the company had more than seventy restaurants, and in October 2016, its first American stand alone restaurant opened in Boston, Massachusetts, followed a few months later by an outlet in the Flatiron District of Manhattan in March 2017. YO Sushi! currently has three restaurants in North America.

Simon sold his controlling interest in YO! Sushi in 2003 when the company was purchased by a private equity firm, and then the remaining 22% of his shares several years later. However, he still receives a royalty stream in perpetuity of 1% of gross sales and is building the rest of his brand YO! brand through YO! Company, which includes YO! Home, YO! Hotel.

YO! Company is the wholly owned holding company of Simon Woodroffe that works with others to develop and seed finance YO! ideas and new YO! brands. YO! Co owns equity stakes and collects royalties from its endeavours. Simon believes that the holy grail of retail today is to constantly and never endingly innovate in order to deliver high luxury without the high cost.

Simon Woodroffe speaks at conferences and corporate events, sharing his story and has written a book to help and inspire anyone wanting to get out of their comfort zone.

What do you do when you’ve been a roadie, a stage designer, a TV executive, you’re nearing 40, running out of money, are unemployable and have a family to support? You start a conveyor belt sushi bar!

That’s what Simon Woodroffe did.

Simon Woodroffe is in great demand as a keynote speaker and motivational speaker at corporate events talking about entrepreneurship, customer service, creativity and innovation. Audiences have proclaimed Simon as “completely inspiring and empowering”, and describe him as an “extraordinary, ordinary guy”.

Simon explains a bit more humbly: “I talk about myself and things that happened to me in my life. And they think, ‘well if he could do that, then I could too’. It’s about inspiration.”

Find out what tricks he learned along the way, and how he mastered the business tightrope whilst launching YO! Sushi, YO! Below, YO! to Go, YOTEL, and YO! Home… all with a view to one day eclipsing Virgin and Easy.

Simon Woodroffe doesn’t do a ‘traditional’ keynote speech where he ‘talks’ and the audience ‘listens’. He works in an interactive way, and the response to this from clients is enormously positive. Simon avoids business clichés, doesn’t use PowerPoint, and speaks candidly from his own experiences.

"96% of respondents were 'dazzled' or 'delighted' by Simon Woodroffe's performance."

"Simon was on excellent form and very effectively opened up key issues for the participants.”

"A most honest and human presentation from a person of great maturity ... Passionate and refreshing."

"Simon had us thinking of real situations where we can now do things differently."

Clients often ask about purchasing books for giveaways and delegate packs. Below you’ll find a selection of products by Simon Woodroffe OBE. Click the images to view on Amazon's website. For bulk orders, please speak with your Booking Agent.

How to book Simon Woodroffe OBE for your event