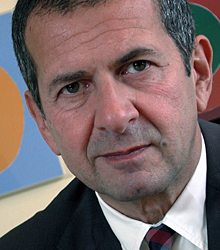 Gerald Ratner was, until 1991, one of the UK's most successful and well-known businessmen. Unfortunately, he went down in history when, at a corporate speaking engagement for the Institute of Directors, he jokingly described one of his products as “total crap” and compared another to an M&S prawn sandwich; suggesting the sandwich would last longer.

This, now infamous speech, spelled disaster for both Gerald and his company, Ratner Group, the world's largest jewellery retail company which included H Samuel and Ernest Jones, of which he was the Chairman and Chief Executive,

However, Gerald's story of how he dealt with the aftermath and returned over a decade later to become, once-again, a major player in the online retail sector is a remarkable journey of perseverance, passion, resilience, entrepreneurial skill and a remarkable lesson in overcoming crisis and adversity.

Gerald Ratner joined the family jewellery business in 1966 and worked his way up the ladder, where, in 1984 he took over the firm of 130 retail stores. By 1990 Gerald had grown the business to 2,500 stores, 25,000 employees, annual sales of 1.2 billion and profits of 121 million. Ratners shocked the formerly staid jewellery industry by displaying fluorescent orange posters advertising cut price bargains and offering low price ranges.

Although widely regarded as 'tacky', Ratners products were nevertheless extremely popular with the British public, until Gerald made the now infamous speech at the IoD conference in April 1991. After the speech, the value of Ratners' group plummeted by around £500M, which very nearly resulted in the firm's collapse. After 18 months of failed damage limitation attempts, Gerald was fired from his own company in November 1992 by the Executive Chairman he had employed.

He lost everything and was reduced to staying-in watching daytime TV; depressed, ostracised and bewildered. He attempted to find work with 50 different companies, all of whom rejected him outright. He tried to buy a site to start a health club in Henley-on-Thames but no bank would back him. That is until he devised an ingenious way of raising some capital.

Gerald Ratner eventually bought and developed the health club, then sold it three years later for £3.9m. This was the beginning of his comeback. He then started his online jewellery business after a fellow jeweller did some market research showing Ratners was still, more 10 years after the event, the most publicly recognised name in jewellery retailing.

However, he was blocked from using his own name by his old company and had to settle for GeraldOnline which today turns over £35M and is the number one UK online jewellery retailer. The specialist diamond retailer sells jewellery, watches and hallmarked gold and silver through a secure site. It has formed alliances with a number of partners including SB&T, an Indian based producer, Goldsmiths and Royal Brierly - the only UK manufacturer of traditional hand blown crystal.

He has also built an American business from scratch, growing it to over 1000 shops in the USA - becoming one of the few UK retailers to succeed on the other side of the Atlantic.

Gerald Ratner has written his story in the book titled 'Gerald Ratner: The Rise and Fall... and Rise Again' which was serialised in the Sunday Times.

Gerald Ratner is in high demand as a business speaker and offers audiences a first-hand account of the demise of his multi-million-pound jewellery business and how he's managed to put this behind him and successfully re-launch his career in a highly competitive marketplace.

Strong practical business messages and the execution of management strategies, combined with innovative ideas are guaranteed to show audiences how to beat the competition, delight customers and increase both sales and profits.

An incisive and astute businessman, Gerald Ratner is a charming and witty speaker, captivating audiences with his incredible infamous story of both his success and failure.

A hugely enjoyable speech which captivated the whole audience with interesting stories and humour. Everyone that attended went away with something and the tone and style in which it was presented set up the rest of the conference superbly. Highly recommended.

Gerald Ratner was exceptional as an 'opener' to our business awards. He delivered his speech in only 10 minutes - but it was riveting, enlightening, humorous and thoughtful - and left the audience wishing for more. We will certainly use him again, and give him a longer time, but if you've only got a 10 minute gap to fill, he is the man.

A great story displayed in a humorous and very entertaining way! A controversial choice for some but very enlightening.

A fascinating display of resilience, self-deprecating humour and lessons in 'what not to do'. Gerald Ratner surpassed all our expectations.

Yes! Gerald was absolutely great! Extremely funny and everyone really enjoyed his speech,including those who were there 5 years ago.If we could get away with asking him for a third time we would! He is definitely a hard act to follow!

Gerald Ratner was absolutely fantastic. Holding the audience from the moment he began speaking, he launched our annual conference with a bang. Although filled with humour, his speech still told the story of a painful fall followed by a jubilant rise. He inspired our delegates to believe they can achieve whatever they want. A great speaker and a great man.

A very few achieve exceptional success and enjoy extraordinary wealth. If you do it once in your life, then you've achieved something of note. Maybe 1% manage to do this. But... If you did it not just once... but did it TWICE? Then what would that make you? Gerald Ratner did exactly this.

Gerald Ratner was awesome! The feedback has been amazing. A lot of chat on the attendees twitter pages. Truly brilliant.

Clients often ask about purchasing books for giveaways and delegate packs. Below you’ll find a selection of products by Gerald Ratner. Click the images to view on Amazon's website. For bulk orders, please speak with your Booking Agent.

How to book Gerald Ratner for your event