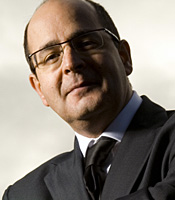 Jonathan Gabay is a creative branding expert, founder of Brand Forensics and on the central Faculty of the world's biggest marketing institute.

As a journalist, Jonathan regularly delivers incisive comment and analysis in the national and trade press, including the Independent, Guardian Unlimited, Scotsman, mad.co.uk, Creative Match, What's New in Marketing, as well as on CNN, SKY, BBC, Channel 4, Five and ITN.

He has addressed business gatherings all over the world and graduates at various academic institutions including, the London School of Economics, Management Centre Europe and Newport University. Jonathan is rated as one of the most popular lecturers at the Chartered Institute of Marketing, delivering lectures to senior managers around the world. He recently contributed to the Institute's White Paper document on a new global definition of marketing and in early 2008 he represented the CIM at a major business debate at the House of Commons concerning global warming and marketing. He Won!... Emphatically!

His experience of working for some of the best known creative agencies and brands in the industry – including heading up departments at some of the UK's top agencies - has shaped his work as an author and Jonathan has several best selling business books, many of which are now used as standard texts for marketing study and been translated throughout the world.

By cutting out unnecessary jargon 'the camouflage of the incompetent' and dry analytical prose, Jonathan's approach provides insight and entertainment in equal measure and his incisive comment on brand-related issues will get to the heart of any event.

Clients often ask about purchasing books for giveaways and delegate packs. Below you’ll find a selection of products by Jonathan Gabay. Click the images to view on Amazon's website. For bulk orders, please speak with your Booking Agent.