8 Out of 10 Cats panelist and If.Comedy Best Newcomer Award nominee 2007 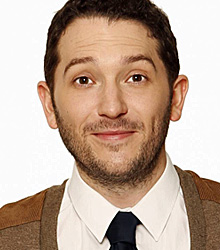 Jon Richardson started out in comedy after dropping out of Hispanic Studies at Bristol University. After a year working as a chef, he realised that he wanted to do stand-up, so entered and won his heat of the BBC New Talent Comedy Search in 2003.

He reached the semi-finals of the Laughing Horse New Act of The Year competition in 2004. Quickly developing throughout 2004, Jon was one of six acts to reach the final of the J20 Last Laugh Comedy Search. Having impressed a sell-out crowd in Bristol he marked the end of his first year in comedy with a performance at the Criterion Theatre in London's West End.

In 2006 he appeared on the Comedy Zone at the Edinburgh Festival, completed a 60-date support tour with Alan Carr and made an appearance on Paramount's The Comedy Store. Jon then went on to be nominated for a prestigious If.Comedy award for Best Newcomer for his show Spatula Pad at the 2007 Edinburgh Fringe Festival.

This was followed in 2008 with a successful Edinburgh run of his second solo show, Dogmatic and winning the award for Best Breakthrough Act at the 2008 Chortle Awards. In the November 2008 issue of Q Magazine, Jon was voted by its readers as one of the top five comedians of the year to look out for in 2009.

Off the back of winning the 2008 Chortle Breakthrough Act Award, Jon Richardson embarked on his first UK solo tour in 2009, 'This Guy At Night'. The show was nominated for the Edinburgh Comedy Awards main prize. That year, he appeared on the BBC music quiz show Never Mind The Buzzcocks. He also appeared on Have I Got News For You, David Mitchell's The Bubble, Michael McIntyre's Comedy Roadshow, The Comedy Store, Comedy Shuffle and Out To Lunch.

He co-hosted a Sunday morning radio show on BBC 6 Music with fellow comedian Russell Howard, and continued to present the show himself, after Howard left, until March 2010. Jon Richardson suffers from OCD (Obsessive Compulsive Disorder), a fact that was joked about many times when he presented alongside Russell on BBC 6 Music radio station, and a topic he uses to garner a lot of his stand-up comedy material. In March 2010 Jon presented a thirty-minute long BBC Three programme about compulsions and weird habits, entitled 'Different Like Me'.

Clients often ask about purchasing books for giveaways and delegate packs. Below you’ll find a selection of products by Jon Richardson. Click the images to view on Amazon's website. For bulk orders, please speak with your Booking Agent.

How to book Jon Richardson for your event