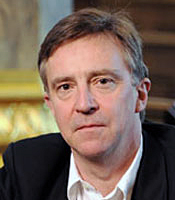 John McCarthy CBE was captured in Lebanon in April 1986 by Islamic Jihad, on his first foreign assignment as a TV news producer, while working as a journalist. He became Britain's longest-held hostage in Lebanon, spending over five years in captivity until his release in August 1991.

His ordeal began when he was working in Beirut for a television news agency. The political situation in Beirut escalated and it became too dangerous to stay. After a goodbye drinks celebration for friends he headed home however, en route to the airport he was kidnapped at gunpoint by Islamic fundamentalists.

John McCarthy spent the next five years, sometimes blindfolded, often very scared, in a mosquito-ridden cell in the Lebanon where he endured beatings, physical hardship and, at times, solitary confinement.

He shared a cell with Irish lecturer and philosopher Brian Keenan for much of his captivity and their banter, sense of humour and friendship in the face of adversity was a lifesaver in every way. Together they tried to comprehend why their guards acted as they did and to understand their political and religious motivations and beliefs. John and Brian sometimes had the courage to stand up to their captors and they were even sometimes able to joke with them.

But there were frightening times too, when they were gagged and bound with tape and transported from one cell to another. Incarceration taught John many things. He developed techniques to overcome physical and mental torture, self-doubt and despair. Above all, he learned to live with himself. John McCarthy's story is dramatic, moving and humbling and captivates all who hear it.

After his release John wrote the bestselling Some Other Rainbow with Jill Morell, who had campaigned tirelessly for his release throughout his 5 years of captivity. This paved the way for a highly successful career as an author, broadcaster and after dinner speaker.

Since then he has written Between Extremes, the story of his Patagonian journey accompanied by fellow Lebanese hostage Brian Keenan, as well as A Ghost Upon Your Path about his Irish heritage. His work marrying travel and reportage also led to You Can't Hide the Sun, an account of his time travelling around Israel and Palestine.

In 2004, John McCarthy returned to Beirut, in what was a personal and emotional journey for him, to make Out of The Shadows for ITV, documenting his quest to understand the Shia Muslims and confront the ghosts of his past. John has worked for the BBC as co-presenter with Sandi Toksvig of the television series Island Race and subsequently as a presenter for the World Service.

He is a regular guest presenter on Radio 4's Excess Baggage.

As a journalist, author and broadcaster John McCarthy is regularly sought-after as an inspirational and motivational speaker, sharing stories of his terrifying experiences and how he needed extreme levels of self-motivation to stay alive.

He endured 1,943 days of unimaginable squalid captivity and during that time he developed many techniques to overcome physical and mental torture, self doubt and despair, qualities that business audiences and individuals find fascinating and informative.

John McCarthy conveys his experiences with great warmth and humility; sharing stories from his life both past and present, and his courage and ability. He presents with clarity, wisdom and, ultimately, great optimism.

A very natural style and delivery from John McCarthy which makes for a presentation that comes from the heart - a superb presentation. Many of the audience were particularly moved to hear the story John told of his experiences, having read his book. Again, it made the evening very personal. The overall performance was excellent - a memorable occasion for all those who attended.

For many people, John's speech was the highlight of the conference. The key word that was used to summarise his speech was "inspirational". He captivated the entire audience and commanded their full attention with his powerful story from beginning to end.

Very professional and natural presentation style. Articulate and humourous in delivering this horrific and arduous recollection of events. Excellent feedback from clients attending.

John McCarthy exceeded our expectations - he had over 200 photographs taken and in every one he smiled! The presentation itself could only inspire others.

His performance was excellent, he was a confident, articulate, relaxed speaker and his narrative was clearly well prepared. John's easy delivery evoked a range of emotions amongst the audience whilst positively sharing his memories of unquestionably, a very difficult time of his life. People valued the choice of speaker and the unusual subject matter.

Everyone was spellbound during the presentation – afterwards many expressed their thanks to John. The performance was the best I have seen for a long time.

Clients often ask about purchasing books for giveaways and delegate packs. Below you’ll find a selection of products by John McCarthy CBE. Click the images to view on Amazon's website. For bulk orders, please speak with your Booking Agent.

How to book John McCarthy CBE for your event