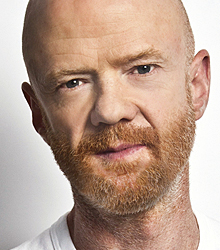 Glaswegian born Jimmy Somerville first shot to fame back in 1984 with groundbreaking band Bronski Beat. Smalltown Boy, their debut single, made the top three in Britain and was a huge hit all over Europe. Bronski Beat went on to have several lively pop dance hits including Why? (No. 6) and a cover of former gay icon Donna Summer's I Feel Love (No. 3), on which they joined forces with Marc Almond.

With Richard Coles he formed The Communards, who spawned the No. 1 classic cover hit Don't Leave Me This Way, followed by So Cold The Night (No. 8) and Never Can Say Goodbye (No. 4), the former of which was the biggest selling single of 1986 and spent 4 weeks at the top of the charts.

Jimmy then embarked on a solo career which saw him chalk up more hits including another stirring disco cover of Sylvester's You Make Me Feel (Mighty Real ) (No. 5), To Love Somebody (No. 8) and Francoise Hardy's Comment Te Dire Adieu, a duet in French with June Miles (No. 14). Jimmy has also collaborated on singles with the The Weathergirls and Sparks.

His 2015 album Homage, a true ‘disco’ album was released to wide critical acclaim. A release of extended mixes and remixes from Homage called Club Homage accompanied it. A rare live acoustic album emerged in 2016 of Jimmy’s live performance at Stella Polaris Festival in Denmark, recorded the previous summer. New and old songs reinvented for a one-off acoustic show.

The Bronski Beat album ‘The Age Of Consent’ was re-released on pink vinyl and extended CD with many unreleased rarities in 2018 to mark the 35th anniversary of the band’s formation.

Jimmy Somerville is currently available for playing live at corporate and private events with his 15-piece band, performing his solo hits as well as the many hits he had with his two hugely successful bands - Bronski Beat & The Communards.

How to book Jimmy Somerville for your event