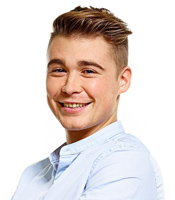 In 2013, James Allcott secured on-screen coverage as a Showbiz Reporter for ITV's Daybreak, presenting and producing red carpet interviews with celebrities including The Rolling Stones, George Clooney, Ben Affleck, Jessie J and Will.I.Am.James also presented a behind-the-scenes feature with Little Mix, on set at one of their recent music videos.

James has appeared as a guest pundit on London Live TV's 14 to 1 football chat show, joining a panel discussion on the merits and downfalls of numerous London football teams and more recently the discussing this summer's world cup.

James has placed great value on learning about the industry from the inside out. Displaying intuition and creativity off camera, James is also a natural in front of it, scripting his own material and creating an easy rapport with interviewees.

Throughout his time working as a producer at ITV, James has worked onGood Morning Britainand has also previously worked on shows including24 Hours in A&E, Al Jazeera sportandThis Morning.

James is a sports fanatic, has a degree in Sports Development with Coaching and these days gets his sporting fix through his podcastGreat Touch for A Big Ladwhich isassociated with Last Word On Sport online.

How to book James Allcott for your event