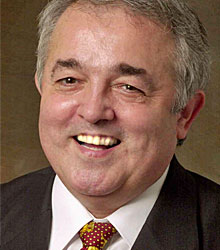 Professor Ian Angell is Europe's leading IT guru and visionary. He is Professor Emeritus of Information Systems at the London School of Economics, arguably the most prestigious Information Systems Chair in the United Kingdom, and a member of the United Nations Steering Committee of Educational, Scientific and Cultural Organisation at the Regional Office for Science and Technology for Europe, based in Venice.

His growing reputation comes as the culmination of over thirty years work developing a new perspective on information systems, stressing that the social, economic and organisational issues are more important than the technological ones: even the very best investment in new technology can be a source of commercial risk, if the societal aspects are not managed properly.

Ian Angell has a first degree in Pure Mathematics, and a doctorate in Algebraic Number Theory, although he now claims to be an “ex-mathematician”. He first came to prominence through his work in computer graphics, and apart from his academic output he has written the software and produced animation sequences for television advertisements and for science and business TV programmes. At one time the animation package he wrote with one of his students, Gareth Griffith, was the market leader in the UK. Griffith subsequently went on to write software used in Spielberg’sJurassic Park and other major films.

Ian acts as a consultant on the management, security and strategic impact of information systems, to many national and international organisations and to a number of governments and the EU. Until 2000 he was a personal advisor to the Cabinet of the Director General of UNESCO, and he has consulted for the Russian Ministry of Science on the impact of IT on employment.

He has also come to the attention of some very senior international businessmen and politicians who have invited him for private discussions about his ideas. In May 2003 he was asked to hold number of private advisory sessions with three of the sons of Sheikh Mohammed Al Maktoum, Crown Prince of Dubai. The CEO of Warner-Lambert once wrote to him saying that, because of a presentation he had made to W-L senior executives in Orlando, the company was changing its whole approach to Internet business.

Professor Angell presented his ideas before the Parliamentary IT Committee at the Palace of Westminster to a cross-party group from both Lords and Commons, and they were “profoundly disturbed” and “visibly shaken” by his forecasts. He was nevertheless invited to be the first to give evidence to the House of Lords Select Committee on e-commerce in Europe, where he “managed to knock the gyroscope over”.

Undoubtedly it is Professor Ian Angell’s radical and controversial views on the global consequences of IT that has brought him such a high-profile reputation as a ‘futurologist’ in business circles and in the media.

Ian’s work has generated substantial media interest, and he is frequently interviewed for radio (particularly Radio 4 and BBC World Service) and television. Appearances include all five British terrestrial channels, Sky, NBC, CNN, and national television in Australia, Canada, Hungary, Italy, and Poland, as well as many business satellite channels.

Professor Ian Angell travels the world, both consulting and delivering highly sought-after and thought-provoking keynote business presentations. His most popular keynote speeches are outlined below.

Innovation: Thinking Outside The Box
In this talk Professor Ian Angell describes creativity and the process of innovation, focusing on what goes into making the next “greatest thing since sliced bread”. Apart from saying what innovation is, he will also talk about what it is not! He will stress that creativity is not about a few lone thinkers on individual journeys to their own personal “light bulb” moments.

In this highly motivational talk, Angell will claim that the potential for innovation is in all of us. The real issue is not just about having the ideas, but about how to avoid the numerous impediments that prevent acts of creativity from reaching fruition. He looks at what individuals and companies can do to nurture talent and trigger innovation, and thereby prosper in today’s rapidly changing commercial environment.

Managing Computerised Bureaucracy
For three days in October 2007, the computerised reservations system of the MGM Mirage hotel and casino chain in Las Vegas was “radically crashing”, making it impossible to manage their more than 15,400 hotel rooms. No guests could check in or out.

Hotels and restaurants have become increasingly reliant, indeed dependent on their Property Management Systems (PMS). In this talk, Professor Angell talks about how companies can develop formal metaschema that enable them to allow a form of ‘controlled discretion’, matched with various ‘break the glass’ procedures that keep a record of all non-standard actions. These both ensure staff do not act arbitrarily, and present management with a record of beneficial actions that can be integrated into incentive schemes. The talk is illustrated with numerous examples of both good and bad practice.

The Flight of The Golden Geese
Professor Ian Angell sets out his warning to the unsuspecting and thus unprotected High Net-worth Individuals that governments are about to “squeeze them until their pips squeak”. Following the chaotic period of the credit crunch Western governments have run out of money, and there is only one place they can go to refill the coffers – the taxpayer. The authorities have already set up ‘High Net Worth Units’, whose sole job is to target anyone and everyone with money but no political protection.

All taxation is theft. This talk is taken from Ian’s book The New Barbarian Manifesto: Flight of the Golden Geese, where he dispenses advice on how to respond to the coming onslaught.

The Obsessive Compulsive Neurotic Manager
Many managers are suffering from the madness of our age: ‘obsessive compulsive neurosis.’ These ‘methodolics’ believe that the world can be made into a tidy place when approached with tidy methods, implemented by tidy minds, using the icon of tidiness, the computer. So says Professor Ian Angell, who for the past twenty years has become increasingly concerned with the way computers are perceived in business, and in society in general. He has come to agree with Pablo Picasso, “Computers are useless. They can only give you answers;” and answers are simply not enough.

This talk is light-hearted, but has a serious message. Full of anecdotes about ‘computer cock-ups,’ it is suitable for everyone who has experienced the perverse reality of computer systems in a business context, and is willing to laugh at themselves – and each other.

Beyond Good and E-ville
Professor Angell gives his forecasts for the effect of computerisation and global communication networks on both political and commercial governance. He relates this to the central position of information systems within the whole spectrum of management, to consider ‘the nature of work’ in ‘the office of the future’ and the ‘enterprise of the future’. Ian concludes by initiating a debate on the likely impact of these emergent technologies on governmental and organisational strategies.

Although he delivers a very serious message, Ian’s style makes the talk suitable for a general audience. He does have a well-earned reputation for sprinkling his talks with liberal amounts of ‘dark humour’ and biting satire.

Is Money-laundering a Crime?
In his talk Professor Ian Angell takes a long hard look at the present state of the relationship between business (particularly banking) and the anti-money laundering (A-ML) regulations. The International Monetary Fund estimates the global scale of money laundering as somewhere between $600 billion and $1.5 trillion annually. Now that’s a lot of money!

Professor Angell intends this talk as a wake-up call to all those businesses who are sleepwalking into disaster, so he concludes by expounding a strategy for coping with the situation. This involves a short review of A-ML technology, where Ian shows that the hyperbole surrounding A-ML software obscures an approach that, although fundamentally flawed, on balance does have a limited value to the business community.

Clients often ask about purchasing books for giveaways and delegate packs. Below you’ll find a selection of products by Professor Ian Angell. Click the images to view on Amazon's website. For bulk orders, please speak with your Booking Agent.

How to book Professor Ian Angell for your event