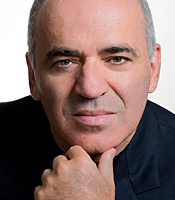 In 2005, Kasparov announced his retirement from competitive chess after 21 years as the No.1 ranked player in the world to devote his time to politics and writing.

Born in Azerbaijan, in 1963, Garry Kasparov was a child chess prodigy who started playing as a five year old and qualified as an International Chess Master at the age of 16. In 1985, aged just 22, he became the youngest ever World Champion. He defended his title five times, including a legendary series of matches against arch-rival Anatoly Karpov.

He successfully defended his title more than any other champion in modern times and his own peak rating record remained unbroken until 2013. His famous matches against the IBM super-computer Deep Blue in 1996-97 were key to bringing (AI) artificial intelligence, and chess, into the mainstream.

Garry Kasparov's outspoken nature didn't endear him to the Soviet authorities, giving him an early taste of opposition politics. From 1989-91 he was outspoken in opposition to the Soviet system and became a prominent voice for democracy and individual rights. Then, in his 20th year as the world's top-ranked player, he abruptly retired from competitive chess in 2005 to join the vanguard of the Russian pro-democracy movement.

He founded the United Civil Front and organised the Marches of Dissent to protest the repressive policies of Vladimir Putin. In 2012, Garry Kasparov was named chairman of the New York-based Human Rights Foundation, succeeding Vaclav Havel. In 2013, he led the Iranian online voting initiative 'We Choose' using a Russian-built e-democracy platform.

The US-based Kasparov Chess Foundation non-profit promotes the teaching of chess in education systems around the world. In addition to chess, Garry Kasparov consults for banks and companies entering the Russian market. He is author of several books and is seen as a role model in Russia. Time and again Garry's prognostications and opinions have been proven correct on everything from the brief duration of the 1991 coup against Gorbachev to Putin's ambitions against Ukraine.

His outlook is sought by investor groups, universities, and think tanks around the world. For old media and new, from the Sunday shows to his popular Twitter (110K+) and Facebook (130K+), Garry Kasparov has become the go‐to source for unflinching candour and remarkable accuracy on Russia.

His status as a legendary world chess champion only enhance Garry Kasparov's appeal as a contributor and guest, and chess and human rights are hardly his only claims to fame. His profound writing and dynamic lectures on strategy and decision‐making have become touchstones in the business and technology communities, cited by everyone from MIT artificial intelligence professors to Credit Suisse analyst reports, and luminaries like Maria Bartiromo and Peter Thiel.

In the past several years alone has delivered keynote speeches and seminars for IBM, Google, Facebook, Oxford Martin, The Cato Institute, General Electric, and the World Business Forum.

Garry Kasparov speaks frequently to business audiences around the world on innovation, strategy, decision making and peak mental performance. In 2013, he was named a Senior Visiting Fellow at the Oxford-Martin School.

His book How Life Imitates Chess on decision-making is available in over 20 languages.

He is a master of strategy and logical thinking, applying the insights and unique perspective from his chess career to the issues of strategy, leadership and success in business. Renowned for being an extremely intuitive chess player, Garry Kasparov also emphasises intuition’s role in achieving an individual’s full potential and achieving superior performance as the leader of an organisation.

His audiences are taken into the world of deep thought, calculus, the analytical mind and what constitutes intelligence without reducing the answer to plain black and white.

Forceful, compelling and knowledgeable are words often used to describe a keynote speech by Garry Kasparov. Speaking in English, the subject matter is at your selection and ranges from Strategy, Tactics and Logical Thinking to Politics.

Garry Kasparov’s engagements are worldwide and year-round and the average duration is 45 minutes. Unlike some keynote speakers, he derives huge enjoyment from the Q&A session which follows the talk, which can last up to half an hour.

Topics include:
• Strategy & Tactics
• Achieving Your Potential
• Strategy & Competition
• Logical Thinking
• Strategy - The Big Picture
• Limit of Endurance
• Leaders vs. Managers
• Success is in the Mind
• How the Computer Changed the Game of Chess Forever
• From Man to Machine
• Making use of Strategic Thinking in Business & Politics
• Strategy for decoding the Complexity of Life
• All you have to do is find the courage to make up your mind

Before a packed house of some 600 Wyoming and regional business and political leaders, Garry Kasparov demonstrated his abilities as a great speaker with a brilliant understanding of global tnesions... Without doubt, Mr Kasparov is not only an engaging and forthright speaker, he also is welcoming in taking audience questions. On a personal basis, I found him to be an untiring world stage leader with compassion for others. He is invited to come back at any time in the future!

I have had the pleasure of hosting Garry Kasparov as a speaker on two occasions in London. His content and delivery is second to none — having enjoyed presentations from Nobel Prize winners, former Presidents and Global Political and Business Leaders — very few compare to Garry Kasparov. Not only would I whole heartedly endorse Garry, I will be inviting him back to speak again this year.

I am writing to highly recommend Garry Kasparov as a thought-provoking special guest of the highest calibre. We have had the fortune of having him as a special guest in several of our communities' Summit meetings. We first invited him for conversation on the subject of strategy – a topic that sense for a former world chess champion. The more we worked with Garry, however, the more we discovered his range to cover other topics that our clients cared very much about: geopolitics, innovation and risk, to name a few. He has participated in some of our largest gatherings as well as in roundtable dinner settings; his ability to engage audiences large and small is rare. He walks in the door with plenty of thoughtful perspectives and ideas but is also quite adept at moderated Q&A conversations as well. Our clients leave with new insights on things they care deeply about and stories they will share for some time to come.

Clients often ask about purchasing books for giveaways and delegate packs. Below you’ll find a selection of products by Garry Kasparov. Click the images to view on Amazon's website. For bulk orders, please speak with your Booking Agent.

How to book Garry Kasparov for your event