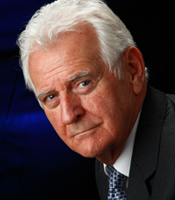 Renowned as one of the country's best and most consistently inspiring motivational speakers, Frank Dick is President of the European Athletics Coaches Association, Member of the IAAF Coaches Commission and Chair (and architect) of the IAAF Academy. He was also the ICCE Global Coaches House Program Director at London Olympics 2012 and will continue in this role through to Rio 2016. From 1979 to 1994 he was the British Athletics Federation' s Director of Coaching, where he was widely acknowledged as one of the outstanding sports coaches in the world.

In this position Frank led the British Athletics team into its "golden era" with Olympic gold medalists such as Daley Thompson, Steve Ovett and Sebastian Coe. Under his leadership, Britain enjoyed a period of unprecedented international success. In his recent book Running My Life Lord Coe said of Frank: “He brought a professionalism to the management of the team that we had never had before or have had since.” Frank Dick personally trained Daley Thompson and created training programmes for individuals such as Gerhard Berger, Katarina Witt, Boris Becker and Justin Rose.

In 2011, Frank Dick was awarded an Honorary Professorship by the National Sports Academy of Bulgaria in recognition of his influence in advancement of coaching in Europe. This followed an Honorary Doctorate by Loughborough University for his contribution to coaching and coach development.

Frank has combined his talent for inspiring sporting achievement with motivating performance in the business world.By recognising the synergy between effective coaching techniques on the playing field and in the office, over the years he has developed a range of inspirational keynote speech themes, workshop topics and bespoke employee development programmes that remain as popular and relevant today as ever.

His expertise derives from years of detailed research into individual success and achievement. Frank combines this wealth of knowledge and experience into an informative and motivational approach to achieving long-lasting transformation of both individual and team performance.

With a history of sporting excellence through coaching some of the best talent in the world he has, over the past 25 years of speaking to hundreds of companies both in the UK and around the world, recognised six key areas of personal and professional development that, once taken out of a “training room” mentality and put into a different context, can lead to individual and team progress simply by giving a different perspective.

Frank's contribution to sport and coaching has been recognised in being awarded an OBE in 1989, induction to the UK Coaches Hall of Fame in 1999 and the prestigious title "UK Sporting Hero" by Sport UK in 2001.

Frank Dick’s involvement in the 2010 Vancouver and 2012 London Olympics was as a “coach of coaches” where he worked with coaches of elite athletes in their preparation for the Games using his vast experience to deliver high performance strategy and operational excellence.

Frank has woven the critical lessons learned through these Olympic experiences into a very attractive portfolio of presentations. These presentations can be the winning difference to help businesses win persistently.

Winning to the Power of Ten
Winning to the Power of Ten is a capture by numbers of the ten critical lessons learned through the Olympic experience and that of high performance sport, which apply equally to business and professional life. Winning performance is the consequence not only of what we deliver in the arena, but of all that makes it happen. How winning is defined, through planning, preparation, performance support and learning processes, to managing change are all covered. But most important is the idea that all is driven by our attitude to winning.

Prepared to Learn
Being prepared to learn has two dimensions. The first is an attitude to ceaseless pursuit of personal development. The second is to ensure that the framework for learning to happen is in place. To gain competitive advantage we must learn faster than the opposition. Of course the challenge of an Olympic Games is an end in itself. But like all challenges in life, it is a critical learning experience.

A Question of Talent
A talent strategy should help you in working out how to deal with the rough diamonds, the underachievers and the genii. Everyone in our teams can be coached to raise their game and to realise their potential, whatever their level of talent. As Frank says, “You don’t have to be sick to get better.” He sets out a clear strategy and action plan for talent spotting, recruiting, coaching, harmonising and affording a high performance pathway to ensure your people fulfil their potential and deliver for the business. Pursuing a talent development process is fundamental to achieving sustainable business performance.

You First
Our life is not a single track road, but a 3-lane highway. The fast lane is our career; the middle lane family, friends & community; the inside lane our personal wellbeing. We have development and performance needs and goals in each lane. All three must be free flowing for if one goes down, the others are compromised. There is an essential tension between challenge and support in achieving this. Frank provides strategies and techniques to turn stress to advantage, and raise business performance.

Decisions! Decisions! Decisions!
Frank believes the difference between average or excellent performance, whatever your role in the business, is your ability to make the right decisions and judgement calls. That’s the case whether they are “in a blink” judgement calls of moment by moment challenges or longer term decisions of strategy. All major strategic change must also address culture change and Frank examines what can be taught and what can be learned in preparing everyone to make the right decisions and to take ownership of them.

To say you understood our requirements and your messages resonated with the team would be a serious understatement. In my experience the impact of guest speakers in your arena tends to dissipate very quickly when the troops get back to work, but I feel very confident that your extraordinary talented delivery will make its mark permanently.

As an organisation in the front line of supporting people affected by the recession, we wanted a motivational speaker at our regional conference to inspire our managers to rise to the challenges they are facing; Frank Dick proved to be an excellent choice and delegates went away buzzing with enthusiasm after his powerful presentation.

Frank was so nice to work with, very engaging presentation style, content was so relevant to our theme and Frank made it meaningful to everyone in the room. The feedback from within the company has been very positive.

The feedback from Frank's speech has been incredibly positive; I have yet to find anyone who didn't take away something from his words. His wisdom, experience and humour came together to form several powerful messages about individual and team performance.

Clients often ask about purchasing books for giveaways and delegate packs. Below you’ll find a selection of products by Frank Dick OBE. Click the images to view on Amazon's website. For bulk orders, please speak with your Booking Agent.

How to book Frank Dick OBE for your event