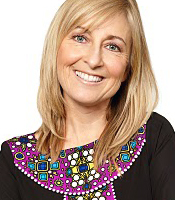 After 12 years as the lead presenter on GMTV Fiona Phillips left at the end of 2008 to focus on other television projects. Her first assignment was a very personal and emotional film; Mum, Dad, Alzheimers and Me for Channel 4 as part of their highly acclaimed Dispatches series.

During her time on the sofa her warmth, Fiona's warmth, intellect and genuine interest has drawn interviewees from all walks of life, from real stories told by the people whose lives have been affected by the events featured on the show, to celebrities and politicians.

As a journalist Fiona writes a weekly column for The Daily Mirror and is regularly asked to contribute to a number of women's weekly and monthly magazines. She also hosts her own show every Sunday on Smooth Radio. Independent radio is where she began her career, having graduated with a B.A. Hons degree in English and a Post Graduate Certificate in radio journalism. It wasn't long before she made the move into television, rapidly being promoting from regional programming to a full time reporter for Sky News. Fiona's warmth, sense of humour and flair for production was evident and she soon became Sky's Entertainment Editor, producing, reporting and presenting Sky News Entertainment output.

Career highlights Fiona has been nominated for the RTS Interview of the Year Award and is one of the best interviewers on the television today. Top Politicians including the Prime Minister request that Fiona conducts their interviews on GMTV and Victoria Beckham chose Fiona for her only TV interview when promoting her book. She also interviewed some of the screen's hottest names from Leonardo DiCaprio and Clint Eastwood, to Brad Pitt and Mel Gibson.

Fiona appeals to all ages and recent research shows she is one of the few celebrities that the public really relate to and who truly believe she is 'one of them'. In recent polls, Fiona has been named as the Celebrity most people would like as their Mum (saying she is both warm and very cool!), Tesco's Celebrity Mum of the Year, Celebrity Neighbour people would most like to live next door to, Schwarzkopf's Hair Icon, 4th in the Guardian's Best Dressed List (2007) and most recently the World's Sexiest Vegetarian!

Fiona is heavily involved in a number of charities. She is an Ambassador for Age Concern and a Patron of Alzheimer's Society, Barnardos, Richard House Hospice, the Down's Syndrome Society and the Mildmay Mission Hospital.

Clients often ask about purchasing books for giveaways and delegate packs. Below you’ll find a selection of products by Fiona Phillips. Click the images to view on Amazon's website. For bulk orders, please speak with your Booking Agent.

How to book Fiona Phillips for your event