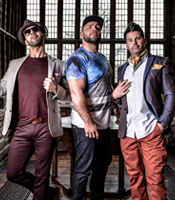 Book Duke
add to shortlist
About

Duke are a beatbox band like no other. Born out of Cheltenham, they quickly gained popularity with open-mic nights, impressing and entertaining with their incredible beat-boxing talents and unique style.

Duke perform a high energy fusion of live vocals, beat-boxing and acoustic guitar, all harmonised to create a completely unique sound. Their sets feature a range of musical genres, all remixed to a fresh beatbox sound with no backing or looping! They have appeared on the X-Factor and performed at some of music's biggest festivals including Leeds Festival, Boardmasters, Freeze Festival, Lovebox, Parklife, Runescape, Little World Festival Meribel and in some of the best arenas around the World - O2 Arena, NIA Birmingham, Echo Arena Liverpool and The Rio Hotel in Las Vegas.

Duke have also joined some of music's biggest names on stage including the late Amy Winehouse, Beverley Knight, Jocelyn Brown, Ms Dynamite, Shy FX, Rodney P, Alicia Dixon and many more. They have also performed at the personal request of stars such as Prince, Wayne & Colleen Rooney and Jenson Button.

Duke are no stranger to the corporate world either, performing at promotional events and work functions for brands such as 3 Mobile, Adidas. Red Bull, Superdry, Havas and Spotify. Due to their exciting and unique style, Duke have become known as one of the most exciting performance acts to see live.

How to book Duke for your event