Dance choreographer, director and wife of the late Paul Daniels 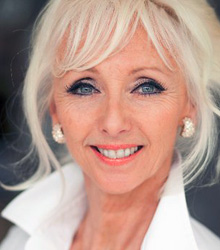 After finishing her training at the Royal Ballet School Debbie joined the Iranian National Ballet until political reasons forced her to return to the UK. There she went into the more commercial side of dance and performed in shows like the Grace Kennedy show, the Paul Squires Show, Citizen Smith and with Abba.

Passing one audition changed her life. The Delfont Organisation placed her as a dancer in the Paul Daniels Summer Show in Great Yarmouth and the rest, as they say, is history.

Since then, together, they have appeared in countless television shows, run for fourteen months at the Prince of Wales Theatre in London's West End, performed for most of the major companies in after dinner cabarets, the list is endless.

Of course, whilst continuing to perform with Paul, Debbie has almost as many credits in her own right, as presenter, an after dinner speaker and a most magical performer.

From the year 2000 until 2003 Debbie fulfilled a lifelong dream, as Artistic Director and Choreographer, of the highly successful Classical Ballet Company, Ballet Imaginaire.

As well as presenting the well-known classics Swan Lake and Coppelia, Debbie has created two completely new Classical Ballets, The Artist's Dream and Phantom – The Ballet for the company.

Debbie McGee is available for after-dinner speaking, presenting and for personal appearances.

How to book Debbie McGee for your event